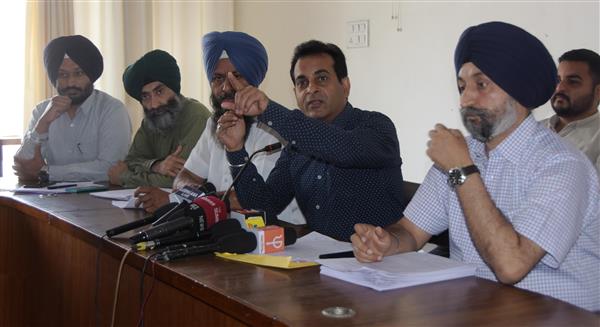 Members of the Public Action Committee to save the Mattewara Forest and Sutlej address mediapersons in Ludhiana. Photo: Ashwani Dhiman

In a fresh petition filed by four persons against the proposed modern industrial park to be set up in around 1,000 acres near the Mattewara Forest and Sutlej in the district, the National Green Tribunal (NGT) has constituted a joint committee, comprising the State Pollution Control Board, Greater Ludhiana Area Development Authority, District Magistrate and Divisional Forest Officer, Ludhiana, to submit a factual report within two months.

The District Magistrate, Ludhiana, will be the nodal agency for coordination and compliance. Meanwhile, the NGT directed that any construction activity, if allowed, within the floodplain zone of the Sutlej, as complained by the applicant, shall be at the risk of the proponent/developer.

The petitioners, Kapil Dev Arora of Ludhiana and others, filed the fresh application before the NGT last month against the proposed modern industrial park. Kapil Arora alleged that the government is going to develop the industrial park under the amended Master Plan 2021 in the floodplain zone of the Sutlej, which would cause serious damage and degradation to the environment, particularly, relating to the Sutlej.

Gagnish Khurana, who is one of the petitioners, said despite earlier directions of the NGT for the protection of floodplains of the Sutlej and forest in the earlier petition filed by them, the Punjab Government had notified amendment to the Master Plan of Ludhiana and converted the “no manufacturing zone” along the Sutlej on land coming under villages Sekhowal, Ghari Fazal, Salempur, etc, for development of the industrial park. Thus, a new application has been filed before the NGT, he said. Advocate HC Arora appeared from the applicant during the hearing in the case held on April 8.

Kuldeep Singh Khaira, another petitioner, said as per the district survey report of Ludhiana as well as the final report of the morphological study of the Sutlej by the National Institute of Hydrology, Roorkee, the width of floodplains of the Sutlej in Ludhiana vary from 11 km in the east to 5 km in west. He said as per the government notification issued last year, the modern industrial park is to be set up just near the embankment. “There have been major floods during the last 35 years and major breaches in ‘dhusi bandh’ of the Sutlej at Garhi Fazal and Mattewara. Thus, the government should not develop the industrial park there,” he added.

A member of the Public Action Committee to save the Mattewara Forest and Sutlej, Jaskirat Singh, said if the industrial park is set up there, it would lead to a slow death of the Sutlej and would also damage the groundwater table. Another PAC member Col (retd) CM Lakhanpal said, “We are hopeful that the modern industrial park project will be scrapped by the Punjab Government now.”