Cumulative CFR static at 2.4% for month 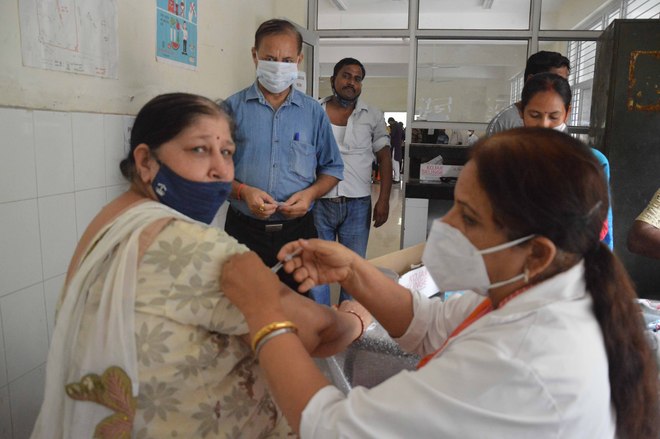 A woman gets vaccinated against Covid. Photo: Inderjeet Verma

Ludhiana, which had made a remarkable turnaround from being the worst-hit to the safest district in the state, has reported no death due to Covid for the past 17 days, the administration has confirmed.

With only five virus deaths recorded in the district during July, which was the lowest-ever monthly toll, the cumulative case fatality rate (CFR) was static at 2.4 per cent and the recovery rate stood at the highest-ever 97.6 per cent for almost a month since July 7, official figures have revealed.

The development assumes significance as Ludhiana had reported 89 Covid deaths in June with the highest single-day toll of eight twice on June 4 and 9.

“We have been able to win over the second Covid wave by aggressively following the strategy of test, trace, treat, vaccinate and strict enforcement of Covid appropriate behaviour, which we need to continue religiously till the dreaded virus is eliminated completely. Varinder Kumar Sharma, Deputy Commissioner

June 10 and 11, while the lowest 24-hour casualties were recorded on May 31 when eight persons had died of Covid. In May, not a single day went without the virus deaths.

April had reported 231 deaths due to Covid with the highest single-day toll of 20 on April 30 and the lowest 24-hour casualties recorded on April 13 when three persons had died of the virus. No day in April had also gone without the Covid deaths.

In March, the district had reported 115 virus deaths with the highest single-day toll of 11 on March 29 and no casualties were recorded on four days on March 2, 5, 7 and 14.

February was comparatively safer when 28 district residents succumbed to Covid with the highest single-day toll confined to three on four days while no death was reported on 13 days of that month.

In January, the district had lost 37 of its residents to Covid with the single-day toll remaining three on six days, while no death was recorded on 11 days of that month.

Ludhiana, which being the largest district with highest population of over 3.5 million, faced the maximum onslaught of the deadliest second Covid wave from March to May. It recorded a total of 3,140 virus deaths — 2,093 locals and 1,047 outsiders — which was highest death toll reported in any district of Punjab.

The turnaround holds significance as Ludhiana had earlier assumed the dubious distinction of being the worst-hit district with the maximum number of daily Covid cases and deaths till May.

If it was mayhem in May when the second Covid wave had rapidly slid into a devastating crisis with the health facilities unbearably falling short, oxygen supplies running low and many dying even without seeing a doctor, June had given a sigh of relief with the signs of gradual retreat and impact of deadly virus plateauing and the safe trend continues in July and August when the daily CFR remains zero since July 19.