Unions decline to give any undertaking, adamant on withdrawal of farm laws 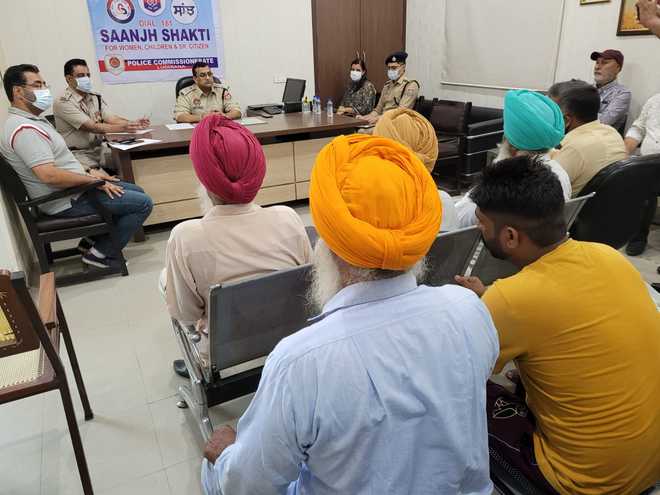 JCP (Rural) Sachin Gupta, along with other senior police and civil officers, holds a meeting with farmers protesting at Adani Group’s logistics park at Kila Raipur, in Ludhiana on Friday. Tribune photo

Acting on the directions of the Punjab and Haryana High Court to sort out the issue with farmer unions holding protest at multi-model logistics park of Adani Group at Kila Raipur in the district for the last eight months, senior police officials today held a meeting with representatives of Jamhoori Kisan Sabha to persuade the protesting farmers to lift virtual siege to the establishment. The protest was launched by farmer bodies as part of the ongoing protest against the Modi government for revocation of three farm laws.

Joint Commissioner of Police (Rural) Sachin Gupta, who headed the team of police and civil officials under instructions from DGP Dinkar Gupta and Commissioner of Police Naunihal Singh, told the farmers that Adani Group had filed a writ petition before the HC and the directions were issued by the court to civil and police administration to discuss the issue with farmers and find out an amicable solution to the issue.

Police officials attending the meeting discussed various possible solutions to sort out the issue but the farmers reportedly declined to give any undertaking while claiming that the protest being held at Kila Raipur at Adani group’s logistics park was a part of the bigger issue and this particular protest could not be isolated from the core demand of the farmer bodies for scrapping the farm laws.

It was officially stated that since the commencement of protest at Kila Raipur, senior civil and police officials have convened 17 meetings with the protesting farmers but an amicable solution had remained elusive till now.