Relief for farmers as migrants return 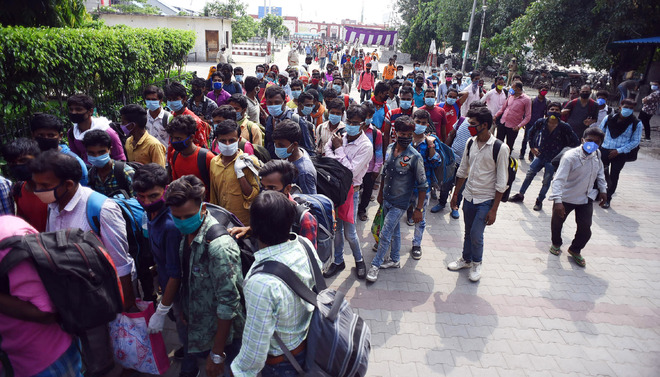 Migrants at the Ludhiana railway station on Thursday. Himanshu Mahajan

The new Jalpaiguri-Amritsar weekly express train, which arrived in the afternoon here with hundreds of migrants on board, brought cheers to the faces of farmers and members of industry, who were grappling with labour shortage after the exodus of nearly 4 lakh migrants from the industrial hub amidst Covid-19 lockdown.

Migrants might have been forced by circumstances to go back to their native places during the two-and-a-half month of lockdown, but many of those who de-boarded at Ludhiana and were waiting in queues for registration at the railway station, apparently had renewed hopes on their faces in anticipation of getting back to their jobs at the factories or being employed as farm worker for paddy sowing.

Darshan Singh, a farmer having driven to the city from Mohali in search of farm workers for paddy sowing, said he had hired six workers for paddy plantation. “I had to promise them payment of one-and-a-half time more wages in addition to good food, accommodation and some other perks,” he said, while adding that a little extra expenditure was worth it because any delay in paddy sowing would have cost him dear.

Three migrants hailing from Bihar had come here in response to a telephone call made by an industrialist to one of them with a request to come back as work in the factory had resumed. Jamal, who had gone back during the lockdown, said, “My employer had called asking me to come back and also bring along some others who were looking for work. That is why I have brought two of my friends who will also get work in the same factory,” he said.

A few other migrants from among those who arrived today said though they do not have any offer for job but they were hopeful that with a vast majority of workers having gone back, they would get employment. Ram Khilavan, a native of Bihar, said, “Now that there is bound to be demand for workers, I shall be able to make some money.”