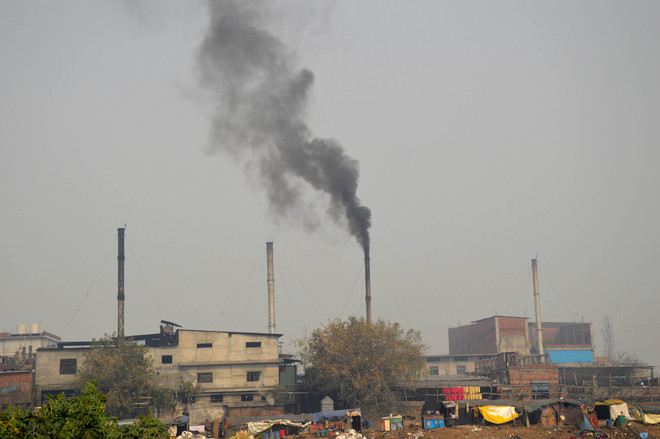 Smoke emanating from a factory in Ludhiana. Photo: Inderjeet Verma

Sixty-year-old Harjinder Kaur of GK Estate and her family are forced to suffer a lot due to massive air pollution being caused by the factories. A huge amount of harmful ash gets collected on her house roof and outer areas in routine.

The ash emanating from the chimneys of a number of dyeing units and other factories has been falling on houses and other buildings on Tajpur Road, Main Tibba Road, Kakka Dhaula Road, Chandigarh Road and many other nearby areas for a long time. But, the complaints made to the departments concerned are falling on deaf ears.

Harjinder Kaur said she and her family generally stay inside house as it was difficult to breathe when smoke level is high in the area. “We avoid sitting in open on roof even on sunny days of winter as ash keeps falling. We don’t put wet clothes for drying on roof as ash leaves stains. If we keep a white cloth in open for one day, it turns black due to falling ash. The authorities must provide us relief,” she said.

Like her, thousands of people are suffering due to high air pollution in various parts of the Ludhiana East constituency and nearby areas. The residents alleged that the ash emanating from many dyeing units and other factories had made their lives miserable. They blamed the PPCB and Ludhiana administration for ignoring the issue. Even the officials of Central Jail on Tajpur Road had earlier raised the issue of air pollution.

Councillor from Ward 14 Kuldeep Janda said, “The areas in Ward 13, 14, 15 and 16 and surrounding localities are very much affected due to ash emanating from the dyeing mills. Black smoke is commonly witnessed in the streets of various residential areas every morning and evening. The bad and cheap quality waste is being used as fuel to run boilers in a number of units.”

He said, “Three vehicles of bio-medical waste were found at a dyeing factory around two years ago. This bio-medical waste was to be used as fuel in that dyeing unit. The matter of air pollution is being ignored despite a large number of people suffering for years. We have raised the matter with higher government authorities too but of no avail.”

Satish Malhotra from ward 15, said, “The ash is very harmful. There are hundreds of dyeing units and washing units on Tajpur Road and nearby areas. We have made complaints to the PPCB against the air pollution but the issue has not been resolved. Besides, some amount of ash from these units is also dumped in open areas like plots and roadsides, increasing the woes. The authorities concerned should take necessary action against the erring units causing air pollution.”

Sanjay Talwar, MLA, had earlier raised the matter with the PPCB and MC but the authorities concerned failed to provide any relief to people. The MLA had also written a complaint to the chairman of the NGT Monitoring Committee. He had alleged that the dyeing units in the area were causing pollution due to which many people had fallen ill.

Krunesh Garg, Member Secretary, Punjab Pollution Control Board, said the local officials were looking into the matter. “I will take up the matter with the PPCB, Ludhiana, officials once again and required action will be taken,” he said.