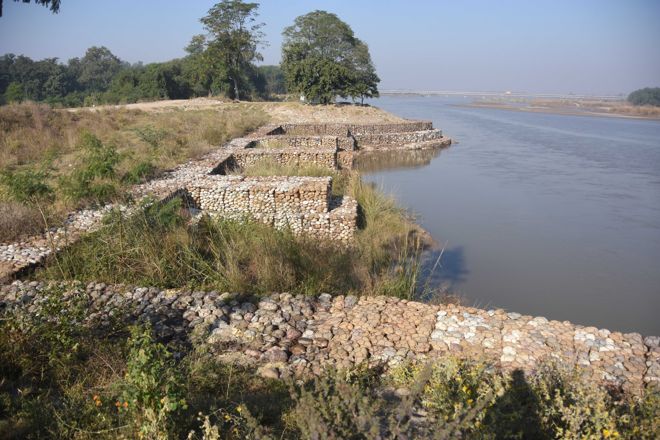 The Sutlej near the proposed site for a textile park. Photo: Ashwani Dhiman

Residents of Sekhowal village and environmental activists associated with different organisations are opposing the AAP government’s decision to set up a textile park near the Mattewara forest and the Sutlej.

When a plan was introduced to set up a modern industrial park in around 1,000 acres of land in different villages near Mattewara forest and the Sutlej during the regime of the previous Congress government, AAP leaders, including Bhagwant Mann (now Punjab Chief Minister), Kultar Singh Sandhwan (now Speaker of the Punjab Vidhan Sabha) and others, had raised questions over the project and the then government as well.

Now, AAP leaders are being accused of changing their stand on the issue by allegedly ignoring the environment concerns and voices of those people who have been opposing the proposed industrial/textile park project since 2020.

“Several villagers were dependent on the panchayat land as they used to grow crops on the land for sustenance. We don’t want any textile or other industrial park be set up there.

We want that the panchayat land should be returned to the village,” he said.

Talking to The Tribune, Sekhowal Sarpanch, Amrik Kaur said that when the land of Sekhowal was earlier acquired, the government authorities had then promised that 250 acres of land would be purchased for Sekhowal villagers, but nothing had been done.

“Villagers want that the industrial park should not be set up on the village land,” she said.

He said: “Earlier, AAP leaders, including Bhagwant Mann, Kultar Singh Sandhwan, Sarvjit Kaur Manuke and others, used to oppose the then Congress government for acquiring the panchayat land for the proposed industrial park. Instead of cancelling the project, the AAP government is supporting the project now. We want that the AAP should clarify whether its stand was wrong during the regime of the previous Congress government or now. We also want that the government should clarify which textile industry does not use any chemical as the government claimed that the textile park will not cause any pollution?”

Kapil Arora, another member of the PAC, has already moved the NGT, demanding that the proposed industrial project should not be set up on the floodplain area of the Sutlej.

In the Vidhan Sabha, the Punjab CM recently stated that no river pollution would be allowed in the proposed textile park project and all environmental clearances and norms would be adhered to.