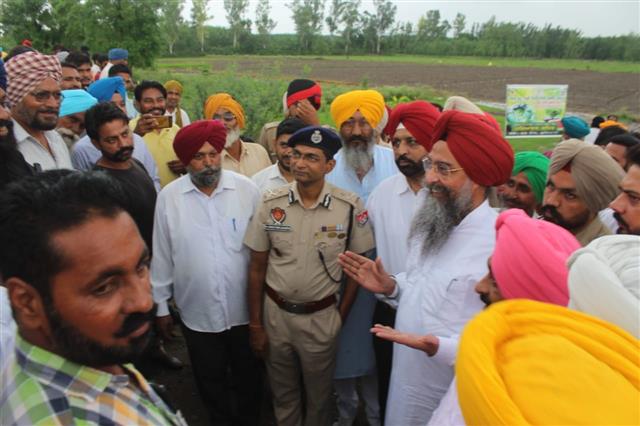 A committee of the Legislative Assembly has been constituted to convert the Buddha Nullah into Buddha Dariya under the rejuvenation project and strict action would be ensured against those discharging pollutants into the water body, said Punjab Vidhan Sabha Speaker Kultar Singh Sandhwan here on Wednesday.

He visited the Buddha Nullah sites at Walipur, Gaunspur and the Jamalpur STP today.

On the occasion, Sandhwan has ordered the Punjab Pollution Control Board (PPCB) to identify the industries releasing heavy metals into the Buddha Dariya and submit a report to him within a month.

The Speaker said the Legislative Assembly’s Committee would closely examine the situation of the Buddha Nullah and the Ghaggar, review functioning and installation of STPs and other projects followed by submission of a detailed report to the government with its recommendations to rejuvenate both water streams. He said exemplary punishment would also be ensured against culprits for polluting the environment.

Inspecting various points along the Buddha Nullah in Walipur, Gaunspur and others villages, the Punjab Vidhan Sabha Speaker said pollution in any form and manner was a crime against humanity and guilty would not be spared at any cost. He said the environment was one of the foremost priorities of the state government, led by Chief Minister Bhagwant Mann.

Meanwhile, members of various organisations have demanded from the Vidhan Sabha Speaker to shift dairies from Tajpur Road and Hambran Road to out of the city limits. The Public Action Committee (PAC) thanked the Speaker for writing a letter to the Chief Minister to protect the Mattewara forest.

Kapil Arora of the PAC said they also gave a complaint against the Punjab Pollution Control Board authorities for failing to take action against the erring industries that pollute the Buddha Dariya, Sutlej and groundwater.

A memorandum has been submitted to Speaker Kultar Singh Sandhwan, demanding that the Sekhowal village land, which was earlier acquired for the industrial park, should be returned to the village panchayat at the earliest.

Later, Sandhwan visited Gaunspur village which has been badly affected due to the highly polluted Buddha Nullah. The Speaker also announced that an environmental study would be conducted by the PGI in Gaunspur village about the impact of polluted water on the health of people, agriculture and cattle.

Notably, the villagers have been complaining about a large number of hepatitis cases, skin-related issues and other health problems at Gaunspur village for a long time. A number of persons have also died due to hepatitis in the village. However, the actual reason behind the deaths was yet to be ascertained. However, the residents blamed polluted waters for the same.

The villagers said the highly polluted Buddha Nullah has also polluted the groundwater in their village. A resident said: “The issue of pollution was raised many times in the past but no concrete steps were taken. It should be checked whether nearby factories are equipped with water treatment plants, and if not, to where the waste water from factories is discharged.”

Seeking redressof their grievances, the villagers had written letters to the governments in the past too but to no avail. Air pollution caused by factories was also a big issue here.