53 fresh cases of contagion reported from the district 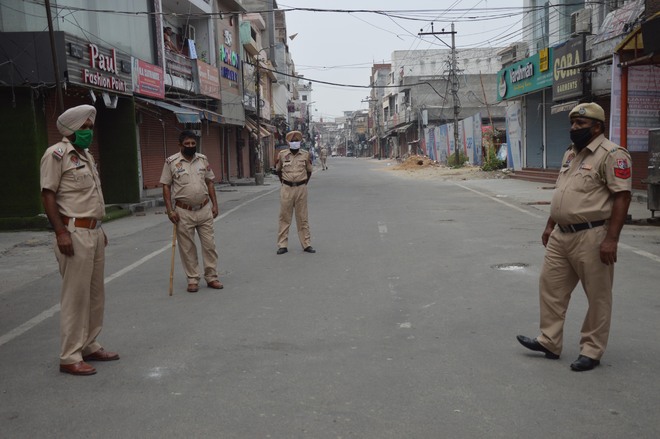 Cops on duty at a micro-containment zone in Ludhiana. Tribune photo: Inderjeet Verma

A 68-year-old man from Daresi Road, who was suffering from kidney disease, also died due to Covid-19. Besides, a 24-year-old boy, who was admitted to the CMCH after a roadside accident, tested positive for the virus and lost his life.

At present, there are 884 active patients in the district.

Deputy Commissioner (DC) Varinder Sharma said, “Till date, 60,384 samples have been taken, out of which report of 59,347 samples has been received. As many as 56,044 samples are negative while the report of 1,037 samples is pending.”

“Now, the total number of Covid patients related to Ludhiana is 2,886 while 417 patients are from other districts/states,” the DC added.

“Unfortunately, 80 people from Ludhiana and 38 from other districts have lost their lives. Till date, 21,045 persons have been home quarantined in the district. At present, the number of such persons is 3,975. Today, 317 persons were sent for home quarantine,” the DC said.

“Whenever the district administration and the Health Department find any positive or suspected Covid-infected person, his/her sample is immediately sent for testing. Similarly, 954 samples of suspected patients have been sent for testing today. Their results are expected shortly,” the DC added.

While appealing residents to follow all directions of the Punjab Government, the DC said, “If residents stayed indoors, they will not only save themselves, but also help in keeping everyone around safe.”