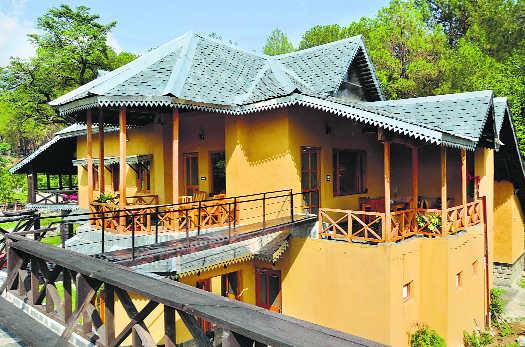 Living in the plains of Punjab, it was a visit to Sardar Sobha Singh Art Gallery at Andretta in the Kangra valley that had inspired my friend to plan a slate-roofed mudhouse on the premises of his sprawling farmhouse.

We both climbed a kilometre of cobbled path in the lap of the Dhauladhars to meet a nonagenarian mason, straight of spine and sharp of mind. It made me travel back 55 years in time, when my father had undertaken the construction of his house. It was to be the first slate-roofed house in the village.

A mason of repute was engaged for Rs 5 as his daily wage and paid an equal amount for an advance. The carpenters and labourers received Rs 2 a day.

A mango grove saw felling and the land was flattened. Sliding on the slopes of excavated earth was great fun. I contributed to brick-making by shaving off the spilled-over clay from the sides of the mould, once the bricks were half dry and turned over. At the age of seven years then, the belief was that it was I who was building my parents’ house.

Roughly dressed boulders made for the foundations. It was also the first house in the village to adopt baked bricks. However, my father chose to use baked bricks only on the outer sides of the walls, with match-sized mud bricks forming the inner table. An insulation against extremes of temperature, the idea was possibly captured by his regular reading of magazines and dailies.

For laying the first floor, dried bamboo lengths were aligned and placed across from wall to wall, with a hewn wooden beam giving midway support. Split open and spread flat, green bamboo lengths with full thickness called ‘chhamman’, made for a layering atop it. Next, a thick spread of fresh jamun leaves was placed over it. A very fat layer of rather stiff mud consisting of clay, sandy soil and straw made up the top layer. I was involved in mixing and kneading of this dense mud. A slurry of fine clay and cow dung plastered on to the walls and floors made the final coating.

The slates were procured from Khaniara mines near Dharamsala, and one fine morning, as my father arrived with a truckload, it thrilled me. Seasoned ‘semal’ wood made for the battens on wooden trusses to anchor the rows of slates. After a year, the house was ready for a whitewash. It was another first in the village, white-washed walls! Till then, house walls were washed in locally mined light grey clay, known as ‘goloo’.

As I fondly remembered all this, a contract was finalised with the legendary mason who would soon be on his way to the plains of Punjab to guide a local team in the building of a mudhouse for my rich friend.