Bujhe-teers won’t be put down 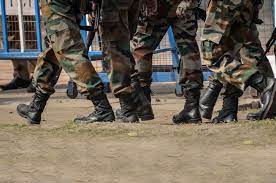 THE ongoing debate on Agnipath and Agniveers triggered a parallel discussion on Bujhe-teers, a pejorative for old and tired soldiers. Literally, the term means extinguished fire-arrows. I have been rather lucky and have come across many non-empanelled (superseded), re-employed officers and old jawans defying age. They, in fact, reignited the embers of motivational fire within me. This is a tribute to two such ustaads.

The first one was Subedar Haraka Bahadur of Assam Rifles. I met him in 2003 in Nagaland’s Pfutsero, the highest-altitude town and the coldest inhabited place in this state. The altitude is 7,000 ft; life is tough in the remote district of Phek. It is made tougher by howling winds unleashing the chill. He was the officiating company commander, responsible for guarding the most crucial infiltration route, the Jessami corridor, linking Myanmar and the dreaded Tangkhul heartland in Manipur with Nagaland.

It was his last day of service, and at 57, he seemed to be in total control. He was wearing only a woollen shirt, and on being asked, he responded that he avoided a jacket as it made him feel lazy. His battalion was struggling to find his relief, and he told me that his family was used to waiting for him, so he was ready to serve, even after retirement. His relief was rushed and the battalion organised a special barakhana for him. Zakhama, my HQ, was en route to his native place in Nepal, so we hosted high tea for him.

Another lesson was learnt from the left-out Dafedar Satwant on the hockey field in 1978. Our team had a crucial final match on his last day of regimental duty. His train was scheduled to leave after half-time. Our captain, Manbeer Hundal, an outstanding hockey player, asked me to break the news that we intended fielding Nagendra in place of Satwant. It was a compromise of sorts as playing on the left-wing is a special skill.

On hearing it, a visibly irritated Satwant unleashed a volley of questions. Was the match unimportant? Had 63 Cavalry found a replacement for him? Why could he not play till half-time? The clincher was, which train in Ambala arrived on time?

A dedicated left-out like him couldn’t be left out. He played with his heart and well past the train’s scheduled departure time. Most importantly, we won the match.

His train was being monitored and it was late. Satwant was taken in a victory procession to the railway station. People gathered, hearing the jaikaras, and asked us if some senior officer was being given a farewell. A final thing Satwant did was to rush to the toilet, change into civvies and hand over his kit to the sports NCO. His parting words, ‘Give it to a worthy successor. I have retired.’

The truth is that people like Haraka Bahadur and Satwant never retire, they keep inspiring us with their never-say-die spirit.