Dad’s cooking & the taste of Diwali 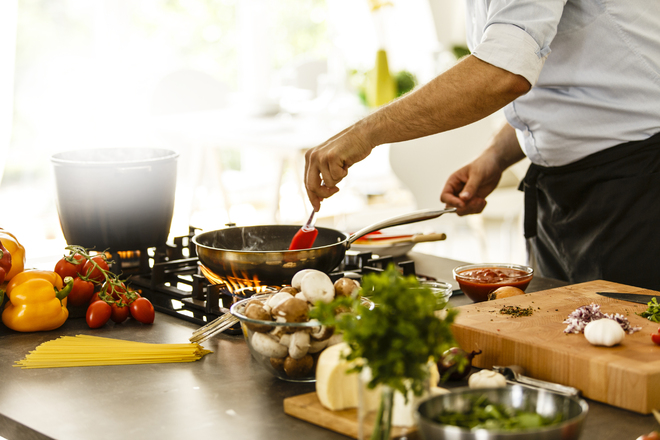 My father’s first name was Amrit and he was an amazing cook. The connection between the name and his dabbling in the kitchen may seem odd, but we, as children, found one.

He would make the most amazing rolls with meat or paneer and eggs. Today, we know them as kathi rolls but decades ago, these were not available as easily as they are now, and for some reason were called ‘Irani rolls’. If there was a dinner party, he would make a whole chicken with stuffing. There was the time when our dog found access to the painstakingly cooked chicken and decided to polish it off. Having eaten handsomely, it arrived to roll on the drawing room carpet and express its appreciation. Not realising that it wasn’t her mother tongue, she purred as best as a terrier could. I’ve come close to my father’s recipe of roast mutton — which went on to become a sort of comfort food for my sons, when they returned from boarding school.

The mess Daddy left in the kitchen was another matter, and my mother, and other concerned parties, would wait till he exited and then settle down to clean the slab and walls and floor.

But it was at Diwali that he came into his own. A few days before the festival, we would sally forth and return with the best possible khoya. Orders for milk would multiply exponentially. Taken out for its annual placing over a stove, a huge kadahi would emerge. His tweed coat would give way to an apron. From the mess in the kitchen would emerge the softest and tastiest kalakand, all garnished with almonds. Piles of grated carrot would be transformed in gajar ki burfi. Then came the piece de resistance, the chocolate burfi that did not taste anywhere as awful as it may sound, but was like a chewy fudge packed with dry fruits. Carefully, all these preparations would be passed into trays and moulds and allowed to set.

The night before Diwali, decorative paper plates would be filled with an assortment of these sweetmeats, to be sent to friends and family. Somewhere along the line, this sweet shop that came and went in an annual festive week got named ‘Amrit di Hatti’, and the name stuck.

It has been quite a while since the hatti sent out its last plate of Diwali mithai. People who remember their taste, or have heard of this annual ritual, still mention it. Some even ask when will I have an apron over my T-shirt and pull out the old kadahi. That’s unlikely, though I won’t be surprised if in another dimension, the hatti has reopened, home-cooked sweets are being distributed and Diwali celebrated.