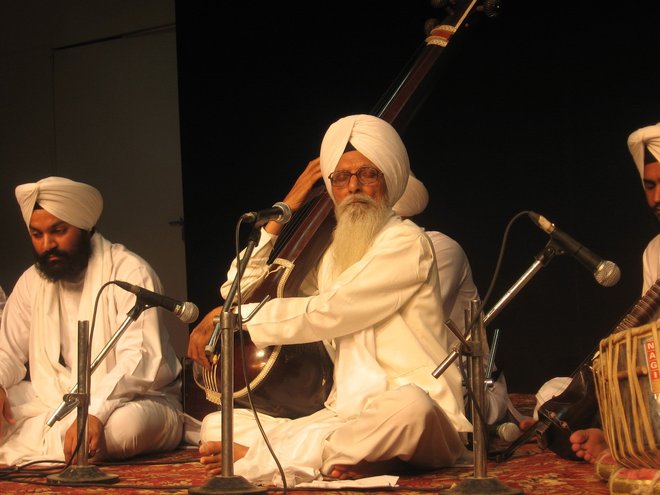 He was an immensely gifted man who made singing and teaching of Gurmat Sangeet, in its true classical form, his life-long mission. For him, wealth and worldly pursuits had little meaning, teaching gur-shabad (gurbani) in its appointed raag was the real purpose of life. Recognition eluded him till the age of 70. After that the trickle started. It never became a deluge but he had the satisfaction of scoring many firsts, especially at the national level, and also in academic circles. Universities from Punjab, as well Jammu region, accorded him fellowships. Bharatiya Sangeet Natak Akademi Award for his contribution to Indian classical music through Gurmat Sangeet followed in 2008. Padma Shri too was conferred upon him in 2021. In between, many more honours, including Tagore Award from the West Bengal Government, landed in his lap.

Prof Kartar Singh breathed his last on January 2 in Ludhiana at the age of 93. Born at Ghummanke village in Lahore on April 3, 1928, Kartar Singh started learning classical music at the age of 13 under the tutelage of Giani Gurcharan Singh, a hymn singer. Later, Bhai Sunder Singh Kasurwale and Bhai Dalip Singh became his ustads. Partition brought him to Ludhiana, where apart from earning his livelihood as raagi, he kept learning the intricacies of dhrupad and khayal from Ustad JS Bhanwra and Pandit Balwant Rai Jaiswal. The unique mellifluousness remained his hallmark.

He never commercialised his kirtan, never earned his livelihood as a professional raagi, but as a music teacher. He set up his academy, Sangeet Bharti, in 1960 and later taught in colleges, ultimately retiring as vice-principal of Guru Nanak Girls College, Ludhiana. Tanpura remained his constant companion. A passion for traditional string instruments, derived from his early days as an accompanist to Rubabi Bhai Karma (a descendent of Bhai Mardana), resulted in inclusion of these instruments in modern-day shabad kirtan. The SGPC appreciated his devotion and scholarship by bestowing upon him lifetime directorship of Gurmat Sangat Academy at Anandpur Sahib. Volumes of Gurmat Sangeet Darpan and Guru Angad Sangeet Darpan bear testimony to his scholastic achievements. He insisted upon low pricing of these books and never charged any royalty.

He also refused to market himself or his art. Yet, recognition came to him. When Dr Manmohan Singh was the PM, his wife read a brief piece about Kartar Singh in The Tribune. She sought CDs of his kirtan and made a point to meet him during a visit to Ludhiana. Noted classical singer Pandit Ajoy Chakrabarti, a Padma Bhushan awardee (and an exponent of Patiala-Kasur gharana despite living in Kolkata), said he learnt many intricacies by listening to the compositions of Kartar Singh. This is a salute to a gentle soul who never coveted credit.