Of monkeys and men : The Tribune India

Of monkeys and men 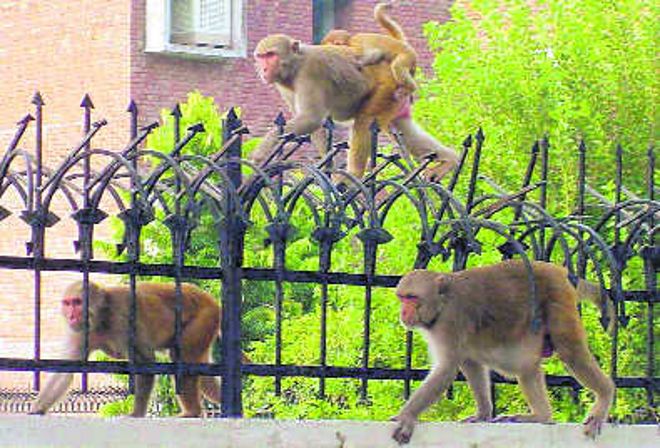 I HAD forgotten about it till my son reminded me of an incident that happened when he was just six years old. Way back in the early seventies, we were posted in a place called Amla in the interior of Madhya Pradesh. At one time, this was Asia’s biggest ammunition depot, built by the British during WWII. In a most imaginative way, the ammunition sheds were located in a vast jungle area camouflaged by tall trees to ensure against any aerial identification and hence bombing. We rechristened it as the ‘equipment depot’. I was posted as the security officer of the depot.

The house that we were allotted had a lot of land attached to it. We started a bit of cultivation. We sowed grams (chholia) and a variety of vegetables. Monkeys would frequently ravage the crop. They were particularly fond of grams. We were very much annoyed at this devastation.

One of the local help, equally distraught at the monkey menace, brought a carcass of a simian from God knows where and hung it on a tree next to the cultivated land for a couple of days to act as a deterrent for the tribe. It did dampen the spirit of the marauders and provided some relief.

The event that reminded me of this incident that happened half a century ago was a simian attack on me the other day when I was walking in a municipal park in Gurgaon. One of the burliest monkeys of the gang pounced on me with such ferocity that I fell down with my turban flung off 6 ft away! Some people ran towards me and helped me up from the ground. My brittle bones, at the age of 87, remained intact.

Monkey menace in this city is very common. Outraged by the frequency of incidents, people have many a time appealed to the MC. I read in the newspapers that the MC plans to hire professional monkey catchers. For all you know, the scheme might already be operational with a few lakhs disbursed. Any organisation of monkey catchers is likely to cook up data and furnish certificates both from the catchers and the authorities of the jungles/areas where the catch has been released. Our Bharat Mahaan remains full of inventive minds.

The average life of a monkey is 20 years. Could it be that the great-grandson of the monkey from the jungles of Amla migrated to Gurgaon to wreak vengeance on the one who acted as a possible accomplice in the offence of showing deep disrespect to one of his ancestors!