They, too, bear the weight 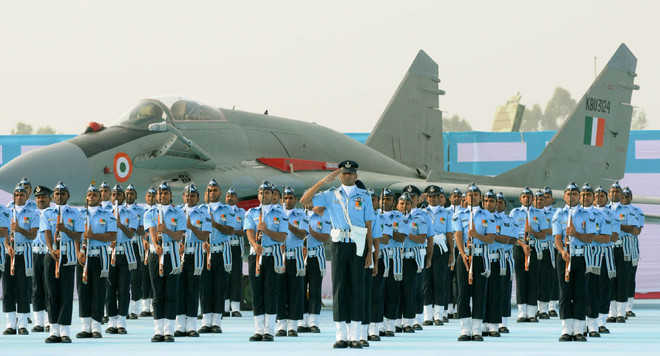 I was brought up in a sea-faring family, my father being a marine engineer. I got married to an Air Force officer, having little knowledge about the life in the armed forces. After the expiry of his leave, we moved to Halwara, where my husband was posted. Buying curtains and a kerosene stove for the house were the first priorities for setting up the new unit. Being the newlywed, I got preferential treatment. Then came the disturbing news of our posting to Bagdogra in 1969. The stress of moving with bag and baggage to a new place was perturbing. A colleague from Bagdogra informed us about the availability of a basha which would provide us some shelter on our arrival.

After landing at Bagdogra, I realised what a basha was. In an area of 25x15 ft, we had a small living room, a kitchen, a western-style washroom, and a small bedroom. During the rainy season, umbrellas protected us from the rainwater dripping from the thatched roof. We took life in our stride.

In November 1971, after sunset, we would hear the sound of firing across the border which gradually intensified. This was followed by a blackout in the camp, creating a feeling of uneasiness. One evening, we were told to vacate the accommodation and move to a safer place as war was imminent. I along with my son flew to Kolkata, my home for 20 years, to join my parents. Then came the address by PM Indira Gandhi declaring war with Pakistan.

In Kolkata, too, the blackout was a common feature. Any news on the casualties would upset us. Those were the days of poor connectivity, no Internet, no mobile phones, it was difficult to get through to Bagdogra to talk to my husband. All the time, I was busy scanning newspapers or listening to the radio to know about the war scenario. When we heard about the surrender of the Pakistan army in East Pakistan, we were happy that the war was coming to an end. I flew back to Bagdogra after the declaration of ceasefire. The few weeks I spent at Kolkata were filled with tension and anxiety.

In 1977, we moved from Jodhpur to the Air Force Station at Hindon. Then started my struggle for school admission of my only child. I visited a number of public schools and waited for hours outside the office of the principal. When I met one, he showed little concern about the ordeal of defence personnel. I got only a few words of compassion and not a seat for my son. I realised the so-called public schools were not meant for public. We spent many sleepless nights fearing my son would lose one year because of mid-session posting.

Though men in uniform fight the war, their families are not isolated from the sufferings which they share with the men. Living in separated married accommodation, frequent postings, schooling for children etc., are a nightmare which many of us have faced in life.