Toddled his way into the heart 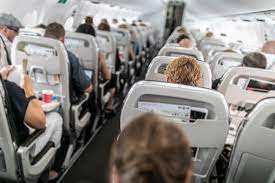 Ihave made many travel friends. These span all ages and nationalities. The Delhi-Goa flight on February 14, 2021, was unremarkable. However, being Valentine’s Day, the passengers comprised many a young people. Girls wearing engagement rings were looking with expectant envy at young women with maroon chooras covering their slender forearms. Romance was palpable.

We had reserved two aisle seats in the same row. ‘Excuse me,’ a young man wearing a loud T-shirt said, ‘could you shift to the aisle seat in the row behind?’

‘I am sorry, but we are travelling together,’ I said, pointing to the wife.

‘OK,’ he said without demur. Moments later, his wife with a toddler in her lap, occupied the centre seat on my left. The child played with the looped belt momentarily and soon became restless, even pushing away the feed bottle. I decided to make friends. The past flashed back....

Having seen off my brother on a midnight international flight in 1984, I decided to stay at the Palam Airport to catch my dawn flight to Indore. That is where I met Sophia and Carol, the American touring teenagers. We never met again, but have maintained postal touch.

In Paris, I formed a close bond with Monami, daughter of our building concierge. She would wait to intercept me in the foyer to play with my medals. I was then touching 50; Monami was nearing three.

The Italian lady, with whom I shared the compartment during our Paris to Amsterdam train ride, was visibly eager to talk. Finally, ice was broken when she offered me a can of beer. We chatted for long. Modern makeup precludes age-guessing. But with 10 children and six grandchildren she could be past 60. Italians rear large broods. It took me years to comprehend my mother-in-law’s massive Florence family tree.

The pretty co-traveller on Amritsar Shatabdi in 1999 turned out to be a great conversationalist of distinguished charm and intellect. Our friendship now extends to the families.

The little boy’s shrieks broke my reverie. Diverting his attention, I asked, ‘Ok, which is my shortest finger?’ He confidently touched the correct finger — I could not have at his age. Bunching my fingers, with only the tips showing, I asked him again. This time, he failed and lost interest in the gimmick. I tried making a funny face. He was not amused, though his mother perhaps was. I then decided to shift to the rear row. But the plane had begun to move for takeoff and the seat-belt sign had come on.

I drew his attention to the overhead green light, telling him that his Papa would come when the light went off. This seemed to work. Fascinated, he kept looking up with hope.

As the aircraft levelled, I offered the seat swap to the young father. Having got poor response from the boy, I began theorising that females are easier to befriend.

At the baggage belt, I walked up and asked the boy to choose one of the closed fists. He came up winner. ‘You will do well in police,’ I said, handing him a sweet. He burbled ‘thank you’, on his mother’s nudge. Moments later, his spontaneous action sent my nascent theory in a churn. Turning back, he blew me a kiss. His smile will remain etched in my memory.