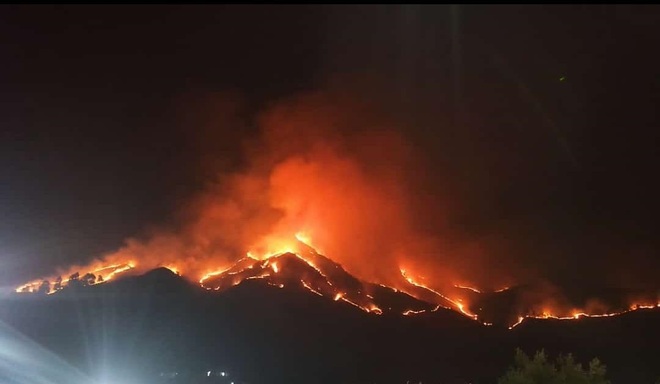 It was an unwritten rule of life in a boarding school that once we were back in the dormitories after dinner, there was no venturing out. After the ‘lights out’ bugle had been sounded, the expectation was that one was in bed and asleep.

On certain nights, unbearably warm, we were allowed to take our bedding on to the narrow balcony of our boarding house from where we watched the odd vehicle as its lights zigzagged along the road to the plains. Then the seasonal forest fires started — live tongues of tangerine and gold against the velvet darkness. They seemed to be alive as they blazed, illuminating the ridges they so hungrily devoured as they danced in the forests of the night and raced at will up and down the hills, destroying all that stood in their way.

And then there were nights when we were summoned to battle these very flames as they had come too close for comfort. The same chir pine needles that formed luxurious tussocks on the slopes and were a pleasure underfoot were prone to becoming the perfect fuel that fed the blazing forest fires.

The fire-fighting that occurred on the hilltop will remain etched forever in our collective memory. At the end of a tiring day, barely had our eyes been closed for what seemed only a few seconds of blissful sleep that the bells started ringing frantically and the entire dormitory was flooded by the bright lights of the overhead tubelight and the shouts of ‘fire, fire’ rang in our ears.

Almost magically, we found ourselves many hundreds of feet below our dormitories, facing a line of fire that was moving fast. All we had was the odd branch broken off from some hapless tree with which to beat the flames — and we did!

The trick was to tackle the flames from downhill. If one was uphill and the breeze started to blow up the hill, there was no way that a human being could outrun it.

One woke up as usual with the rouser bell at 6 am for PT the next morning — singed hair and all. We would go about our daily routine in spite of the headache caused by a combination of smoke inhalation and a disturbed night’s rest. There was no preferential treatment whatsoever just because you had fought a fire in the wee hours the night before! And, it was never about bravery and certainly not about that glorious thing called courage. Perhaps, somewhere it was about a thing called doing one’s duty. It was also about choosing to do the harder right as opposed to the easier wrong. Certainly, these tenets form the bedrock of one’s character and must never be neglected in life.