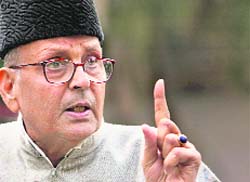 For decades, India had been in the forefront of the struggle against apartheid in South Africa. We had been able to develop a strong anti-apartheid sentiment amongst a large number of countries and had used it to give this movement a push at almost all international fora like NAM and the UN. We had also been championing the cause of Nelson Mandela’s freedom as he had been in prison for nearly three decades.

The momentum built by Indira Gandhi was taken forward by Rajiv Gandhi when he organised the Africa Fund summit in New Delhi in 1987 to further the cause of those oppressed in South Africa and mobilise support for Mandela’s release.

Finally, the hard work put in by the Government of India at various levels yielded positive results, when South African President FW de Klerk decided to dismantle the apartheid apparatus and release Mandela. This was great news for us and its impact was such that the then PM VP Singh, who had been in office just for a couple of months, immediately decided to share this good news with the country. Word was conveyed to Doordarshan that the PM would address the nation.

But for the Asian Games held in New Delhi in 1982, the modernisation of television in India might have been further delayed. First came the colour TV followed by the equipment for the outdoor coverage of the games. We, however, still lagged behind in certain crucial areas, particularly in our news telecasts as our newscasters were handicapped in the absence of modern equipment and teleprompters. With due respect to Protima Puri, her contemporaries and successors, presentation of news earlier used to be simple paper-reading. With the introduction of teleprompters, the presentation of news underwent a metamorphosis.

It was sometime in 1990, late in the evening, that a message was received that the PM would be visiting the Doordarshan Kendra on Parliament Street. Since I used to reside just behind the kendra, it did not take me more than a few minutes to reach the venue. Just then a message was received that the PM had already left. It was almost a surprise visit at short notice. As a result, all security arrangements could not be put in place, but as the premises were protected, the extent of risk was considerably diminished.

On arrival, the PM was received by the top brass of Doordarshan and conducted to the studio. A copy of his speech was on the table. The PM was briefed by the technical staff that he should only look into the camera and read the text as it appeared. Out of sheer habit, while rehearsing, the PM picked up the paper and started to read from it. He was corrected and told that he was only to focus on the camera and not do any paper-reading. He was explained the mechanism of a teleprompter. Thereafter, he adjusted quickly and chuckled as he remarked, ‘Toh yeh baat hai, main bhi hairan tha yeh log itna sab itni jaldi kaise rutt lete hain!’