Reservation would be implemented in Indian Coast Guard and defence posts, and all 16 Defence Public Sector Undertakings 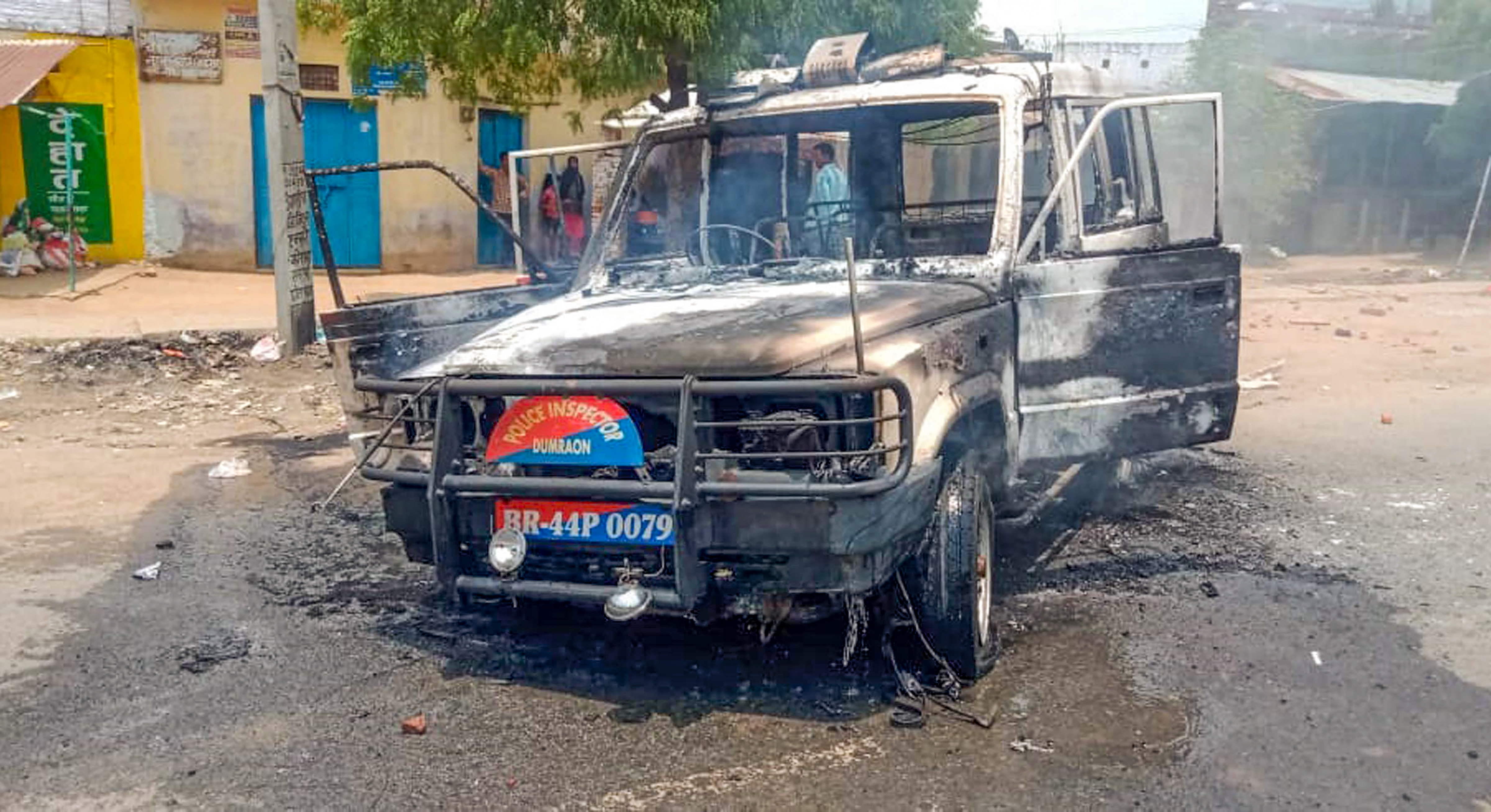 The charred remains of a vehicle at Dumraon police station in Buxar, Bihar, on Saturday. PTI

As anti-Agnipath protests entered the fourth day with railway properties damaged in Bihar and West Bengal and 369 trains cancelled across India, the government today offered fresh concessions for Agniveers in yet another bid to calm tempers.

Following a high-level meeting between Defence Minister Rajnath Singh and the Chiefs of armed forces, the MoD announced a reservation of 10 per cent in jobs for Agniveers. The reservation would be implemented in the Indian Coast Guard and defence posts, and all the 16 Defence Public Sector Undertakings. Necessary amendments to rules would be undertaken to implement these provisions.

Home Minister Amit Shah said 10 per cent vacancies in the Central Armed Police Forces (CAPFs) and Assam Rifles would be set aside for Agniveers who would also be allowed three-year relaxation in the upper age limit for induction into the paramilitary forces. The current prescribed age limit for recruiting constables in CAPFs is 18 to 23 years.

The Shipping Ministry unveiled job options for Agniveers in the merchant navy, while the aviation and urban affairs ministries said options would be explored for supporting Agniveers with jobs. Urban Affairs and Petroleum Minister Hardeep Puri said PSUs under the petroleum and housing ministries were looking at ways to induct Agniveers. A similar assurance came from the Civil Aviation Ministry.

The youth, however, remained on the protest path, unfazed. They are against the new four-year recruitment plan with a promise to retain only 25 per cent into regular service after four years. The remaining 75 per cent would need to return to civil life and look for other job options. While the government’s outreach continued, agitators attacked railway properties in Bihar and West Bengal.

In Bihar, which saw a bandh today, Taregna railway station was torched. The East Central zone railway, headquartered in Bihar’s Hajipur, had to cancel 32 trains in the state.

“To ensure safety and security of passengers and railway property, trains originating in other zones will ply through East Central zone only after 8 pm on Saturday and continue till 4 am on Sunday. Movement of such trains will be restored at 8 pm on Sunday,” said ECR Chief Public Relations Officer Virendra Kumar.

Roads and railway tracks were blocked all day at multiple places and coaches continued to be set on fire.

Protest against the Centre’s Agnipath scheme took a violent turn in Ludhiana on Saturday. Over 30 masked youths carrying sticks and rods vandalised the local railway station.

Hundreds of youths protested in Gohana and blocked the Panipat-Rohtak highway. As attempts were made to pacify the protesters, the youths hurled stones at police personnel.

New Delhi: Congress president Sonia Gandhi, in a message to the protesting youth, said her party would work for the withdrawal of the “directionless” plan. The Congress has announced ‘satyagraha’ at the Jantar Mantar on Monday. — TNS

Those who have cleared the physical test in the past two years must be allowed to appear in the written exam for joining the Army. — Bhagwant Mann