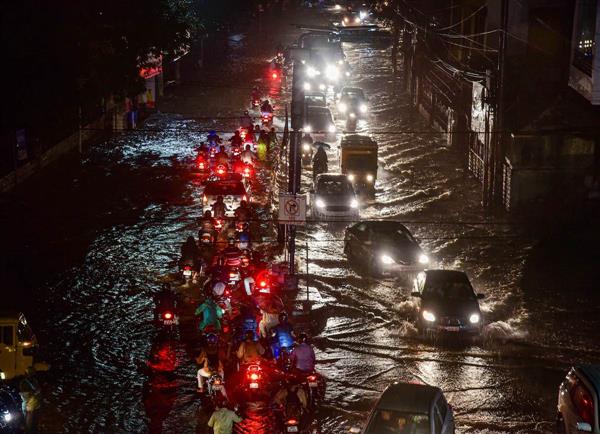 Incessant rain is back in Hyderabad after two days of lull, bringing with it lot of scar and uncertainty, flooding and more water accumulation in low lying areas.

The city has already reported two more deaths. A six-year-old child was killed after a wall collapsed in Hyderabad’s Turkapet area and another person was electrocuted in Old Malakpet area.

Heavy rains have resulted in around 50 deaths in the state so far. Another wall of the historic Golkonda Fort collapsed due to continuous rain. Last week saw lot of death and destruction due to rain with the Hussain Sagar and other water bodies filled up beyond the danger mark, inundating their neighbourhoods.

People had heaved a sigh of relief when the rains stopped, but after a two-day break, heavy rains lashed the city again on Saturday with Bandlaguda in Uppal recording a rainfall of 119 mm by 9 pm. Heavy rains resulted in panic in many areas, where people were yet to recover from the destruction caused by rain on last Tuesday.

India Meteorological Department (IMD), Hyderabad, has issued a weather warning asking people to stay home as there was a possibility of thunderstorms accompanied with lightning and heavy rain across Telangana on October 20 and 21.

Rainwater disrupted travel to the Rajiv Gandhi International Airport and motorists were asked to take the Outer Ring Road (ORR). Elsewhere in the city, people heading home were stuck in traffic jams and suffered a hellish experience.

Education Minister P Sabitha Indra Reddy, who went around the city, said food, medicines, drinking water etc. were being provided for the residents. These people who needed to be housed in camps were tested with rapid antigen for COVID-19 before being put in the camps.

IMD issued a yellow warning as water continues to disrupt traffic and threaten outbreak of vector disease in low-lying areas. People have been advised to take precautions due to wet and slippery roads, uprooted trees and electric poles.

In neighbouring Andhra Pradesh (AP), Meteorological Centre has said cyclonic circulation was observed over west-central Bay of Bengal off south AP coast and extends up to 1.5 km above mean sea level. Under its influence, a low-pressure area is very likely to develop over the same region during the next 24 hours. It said thunderstorms along with lightning were likely to occur at isolated places in north coastal Andhra Pradesh.