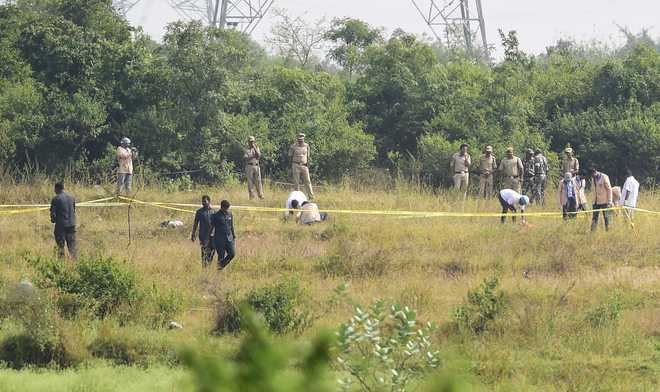 Terming the November 2019 encounter killing of four rape-cum-murder accused in Hyderabad as fake, a Supreme Court-appointed committee has recommended that 10 police officers involved should be tried for murder.

In its final report submitted to the top court, the Justice VS Sirpurkar(retd)-led committee said the police version that accused snatched pistols from them and tried to escape was unbelievable and not backed by evidence.

The committee recommended that “All the 10 police officers - V Surender, K Narasimha Reddy, Shaik Lal Madhar, Mohammed Sirajuddin, Kocherla Ravi, K Venkateshwarulu, S Arvind Goud, D Janakiram, R Balu Rathod and D Srikanth, are to be tried for the offences under Section 302 read with 34 IPC, 201 read with 302 IPC and 34 IPC, as the above discussion would show that the different acts committed by each of them were done in furtherance of common intention to kill the deceased suspects.”

On November 27, 2019, a woman veterinarian was raped around midnight near Outer Ring Road at Shamshabad on the outskirts of Hyderabad. The accused later carried the body to Chatanpally, near Shadnagar town, and set her afire.

The committee concluded that three of the accused killed in the fake encounter were minors. "The police were well aware about the school records of Jollu Shiva and Chennakeshavulu and yet have not recorded the age of the deceased persons according to the admission registers at any given point of time. Therefore, we are of the opinion that at the relevant time, Jollu Shiva, Jollu Naveen and Chintakunta Chennakeshavulu were minors," the panel wrote in its report.

Police had claimed the accused attacked policemen when taken to Chatanpally to recover the victim’s mobile phone and reconstruct the crime scene. Two of the accused allegedly snatched weapons from policemen and opened fire. All four were killed after police returned the fire, they had said.

The top court had on December 12, 2019 appointed a three-member panel headed by former top court judge VS Sirpurkar to probe into the killing of four men accused of raping and murdering the veterinarian in Hyderabad by Telangana Police in an alleged fake encounter. The other two members of the panel are former Bombay HC judge Rekha Prakash Baldota and former CBI chief DR Kartikeyan. The top court had given several six-month extensions to the Justice Sirpurkar committee to conclude the inquiry.