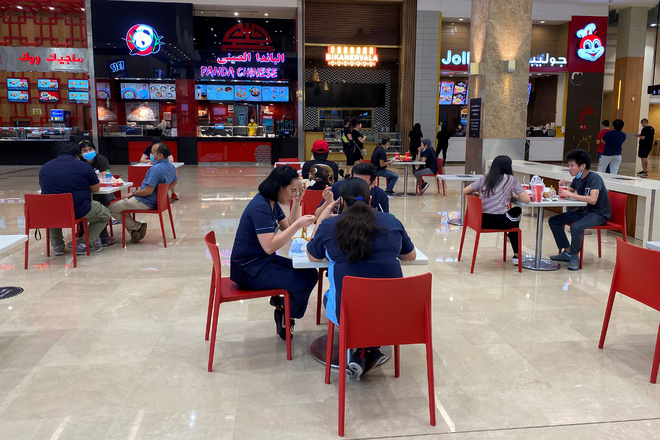 People in a food court at a Dubai mall after the UAE Government eased the curfew and allowed stores to open on Sunday. REUTERS

Three more Indians working in the Gulf have lost their jobs for “Islamophobia” amid a social media uproar in the UAE, Kuwait and Oman over some Indian accounts targeting the Muslim community for the spread of Covid. It takes the number of sacked or charged expatriates in the UAE to nine.

The men now join nearly half a dozen hate-mongers who have similarly landed in trouble in recent weeks, reported the Gulf News.

Targeting of Muslims in the social media and in TV studios began after several Covid-positive cases were linked to a congregation of Tablighi Jamaat at its New Delhi headquarters.

Former Indian envoy to UAE Navdeep Suri recalled on Twitter that thousands of Egyptians were deported for suspected Muslim brotherhood affiliation post 9/11 and again after the ‘Arab Spring’. “The record of zero tolerance on religious extremism in the UAE is pretty consistent,’’ he said. In 1992, several Pakistani schoolteachers were deported for holding extreme views on the demolition of the Babri Masjid.