Total 126 arrested so far, police say have released pictures of over 70 who were involved in violence 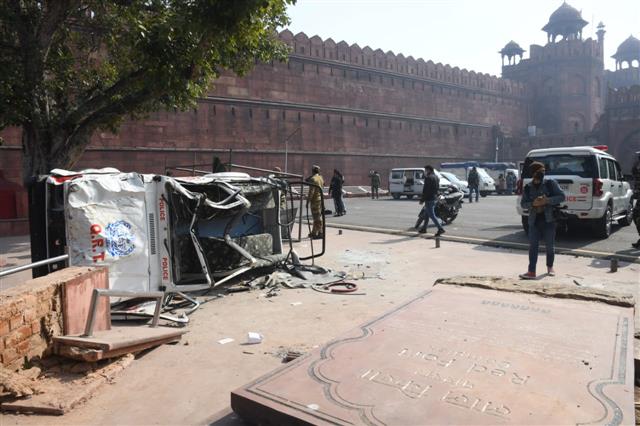 The Delhi Police have arrested three more people in connection with the Red Fort incident on Republic Day, taking the total number of those in its custody for the violence that took place across the national capital during the farmers’ tractor parade to 126, officials said on Saturday.

The three have been identified as Harpreet Singh (32), Harjeet Singh (48) and Dharmender Singh (55), all residents of Delhi, they said.

They were nabbed by the special investigating team (SIT) of north district on Wednesday. The crime branch, which is also investigating the cases, formally arrested them on Friday, police said.

Thousands of farmers protesting the Centre’s new agri laws had clashed with the police during the tractor parade on January 26.

Many of the protesters, driving tractors, reached the Red Fort and entered the monument. Some protesters even hoisted religious flags on its domes and a flagstaff at the ramparts, where the national flag is unfurled on Independence Day.

Police said they have released pictures of over 70 people who were involved in the violence on January 26. Now their identification is underway, they said.

So far, a total of 126 people have been arrested in connection with the Republic Day violence across the national capital, police said.

“We are constantly examining the videos and footage which we have received to get clear picture of the people involved in the violence. The process of identification is underway,” Delhi Police PRO Chinmoy Biswal said.

The objectionable videos on farmers’ issue being uploaded from locations out of India are also being examined. The Cyber Cell of the Delhi Police is investigating the matter, he added.

The Cyber Prevention Awareness and Detection (CyPAD) unit of Delhi Police has served around seven to eight notices.

“We have sent notices to around seven to eight people. However, only two of them have responded. They have asked for some time to join the investigation,” a senior police officer said.

The Delhi Police on Wednesday arrested a man named Dharmendra Singh in connection with the violence at Red Fort during the farmers’ tractor parade on Republic Day.

Earlier, the police had announced cash reward of Rs 1 lakh for information that can lead to the arrest of actor Deep Sidhu, Jugraj Singh, Gurjot Singh and Gurjant Singh who hoisted flags at the Red Fort or were involved in the act.