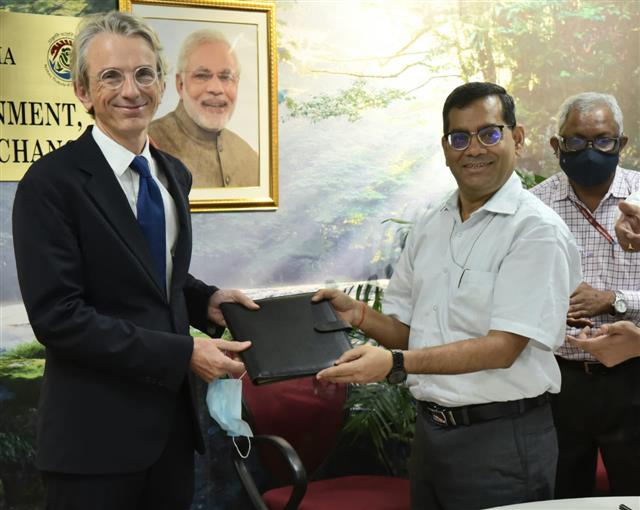 India on Thursday officially joined the High Ambition Coalition for Nature and People, a group of more than 70 countries encouraging the adoption of the global goal to protect at least 30 per cent the of the world’s land and ocean by 2030 (30x30) with Rameshwar Prasad Gupta, Secretary, Ministry of Environment, Forest and Climate Change, handing over the signed agreement to Emmanuel Lenain, Ambassador of France.

HAC members currently include a mix of countries in the global north and south; European, Latin American, Africa and Asia countries are among the members.

India is the first of the BRICS bloc of major emerging economies (Brazil, Russia, India, China and South Africa) to join the HAC, according to an official statement.

India’s announcement comes in the lead up to a high-level biodiversity meeting, hosted by China.

The virtual meeting from October 11-15 will tackle key aspects of the biodiversity treaty to be finalised in 2022.

The global 30x30 goal is currently a centrepiece of the treaty.

Expressing delight at India joining member countries of HAC, Gupta said resource mobilisation will always be the cornerstone for implementation of policies and programmes for conserving biodiversity. India will ensure all support in meeting the global biodiversity targets, he added.

Welcoming India’s decision, Lenain said India joining the High Ambition Coalition on the eve of CoP is a real game changer and will boost multilateral efforts.

Stating that India is a major player for biodiversity protection, the French ambassador informed that this coalition aims to promote an international agreement to protect at least 30 per cent of the world’s land and ocean by 2030.