RJD leaders get more than 50 per cent of ministerial berths 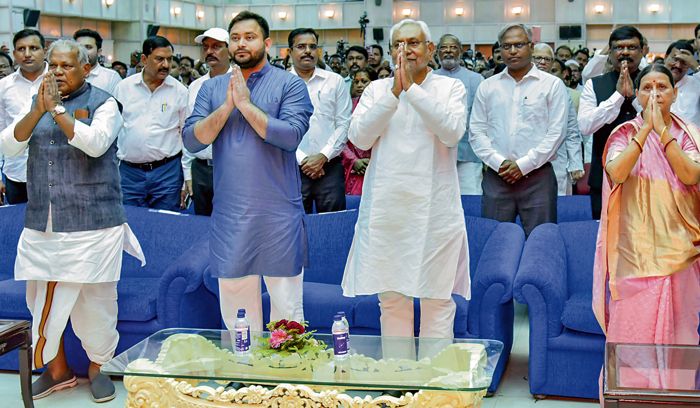 As many as 31 ministers, including Deputy CM Tejashwi Yadav’s maverick brother Tej Pratap Yadav, were sworn in by Governor Phagu Chauhan in Patna.

Nitish Kumar kept 11 berths for his party — the Janata Dal (United) — which last week broke off with the BJP to join RJD and others. The Congress, also a partner in the ‘grand alliance’, was given two berths, though earlier its leaders had claimed four for the party. One from Jitin Ram Manjhi’s Hindustani Awam Morcha and the lone Independent MLA, Sumit Kumar Singh, also took oath today.

Nitish Kumar retained most of the ministers of his party from the NDA alliance, as also important portfolios like Home and Finance. He kept the all-important Home Department, which gives him direct control over the state police, along with general administration, vigilance, Cabinet secretariat, elections and “any other departments not assigned to others”.

The Finance Ministry was allocated to Vijay Kumar Chaudhary of the JD-U.

Deputy CM Tejashwi Prasad Yadav has been given key portfolios like health, road construction, urban housing and development and rural works and brother Tej Pratap Yadav environment, forestry and climate change. Besides the CM and Deputy CM, only Chaudhary with finance, commercial tax and parliamentary affairs, Bijendra Yadav with power and planning and development, and Sanjay Kumar Jha with water resources and information have got more than one portfolio. The Cabinet can have up to 36 ministers. The Bihar cabinet has 33 ministers, including the CM and Deputy CM. Sources say some seats have been left for expansion in the future. The combined strength of the ‘grand alliance’ increased from 163 to 164 after Independent MLA Sumit Kumar Singh extended support.