4 held in UP over self-immolation bid by 2 women 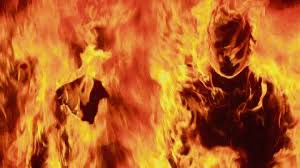 Four persons have been arrested in Amethi after a woman and her daughter set themselves on fire outside the Chief Minister’s office in Lucknow, alleging police inaction in a case of dispute over a drain, the police said on Sunday.

However, the condition of the woman and her daughter continued to be critical, a senior doctor said.

Circle officer of Gauriganj Arpit Kapoor said, “Four persons were arrested yesterday. They have been identified as Arjun, Sunil, Rajkaran and Ram Milan.”

The police said the accused were involved in a dispute with Safia and Gudia over the usage of the drain. A case was registered against them under relevant sections of IPC on May 9. — PTI