4 out of every 5 families in Delhi-NCR facing pollution-related ailments: Survey : The Tribune India

4 out of every 5 families in Delhi-NCR facing pollution-related ailments: Survey

The responses were sought from the residents of Delhi, Noida, Ghaziabad, Gurugram and Faridabad with 63 per cent of respondents being male 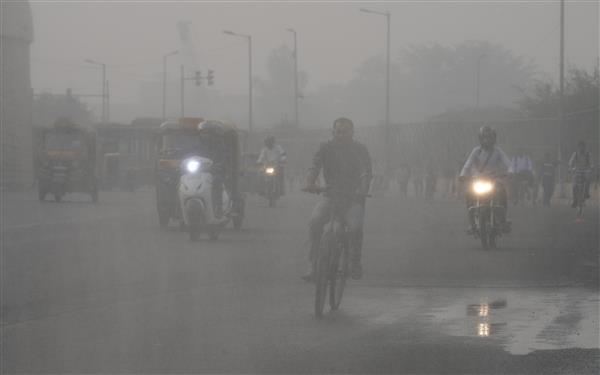 Vehicles ply on a road amid low visibility due to a thick layer of smog, in New Delhi, Saturday, Nov. 05, 2022. PTI photo

Four out of every five families in Delhi-NCR have claimed to have experienced pollution-related ailments in the last few weeks, according to a survey.

Meanwhile, 18 per cent of the total 19,000 people surveyed by LocalCircles have already visited a doctor.

The survey also found that 80 per cent of the surveyed families have at least one member who is experiencing some kind of respiratory problem due to air pollution.

The responses were sought from the residents of Delhi, Noida, Ghaziabad, Gurugram and Faridabad with 63 per cent of respondents being male.

“Four in five Delhi-NCR (National Capital Region) families surveyed have someone experiencing pollution-related ailments: 18 per cent have already visited a doctor or a hospital,” the survey mentioned.

Meanwhile, 13 per cent were said to be unaffected by air pollution as they are not living in Delhi-NCR at the time.

In effect, to avoid the impact of air pollution, some have temporarily moved out of the national capital region, while the majority of those remaining are paying a price – court ill health.

When a similar question was asked five days after Diwali, 70 per cent citizens had complained that someone in their family was experiencing the same pollution-related illness.

This number has risen by 10 per cent in a matter of five days, during which 13 per cent of the respondents have left Delhi-NCR temporarily.

LocalCircles is a community social media platform that holds surveys on issues of governance, public and consumer interest.