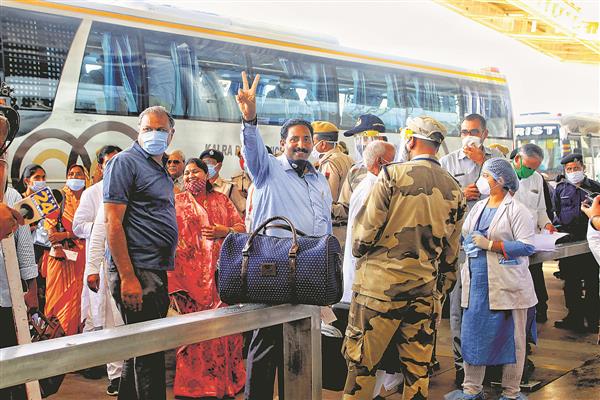 Amid the political crisis, Rajasthan Congress MLAs arrive at the Jaipur airport on Friday. PTI

Over 50 Congress MLAs in the Ashok Gehlot fold, who were camping at a hotel on the Jaipur-Delhi Highway amid the ongoing political crisis in Rajasthan, were on Friday shifted to Jaisalmer in three chartered flights.

Transport Minister Pratap Singh said the MLAs are being shifted to Jaisalmer so that they remain united.

He said the Chief Minister’s strategy is that not a single MLA is poached.

The three chartered flights carrying the MLAs took off from here and landed at Jaisalmer, a distance of more than 550 km from Jaipur by road. The MLAs were taken to hotel Suryagarh in bus and other vehicles amid tight security. “We are going to Jaisalmer for a change,” Congress MLA Prashant Bairwa said at the Jaipur airport.— PTI