Yediyurappa assures appropriate action against those responsible for the explosion 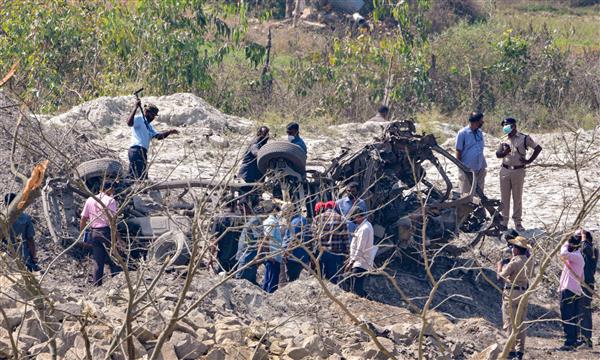 Officials inspect the spot where an explosion took place, in Shivamogga district on January 22, 2021. PTI

Karnataka Chief Minister B S Yediyurappa on Friday said five people were killed in the powerful explosion of a truckload of gelatin sticks at a stone crushing unit in Shivamogga district and assured action against unlawful mining and those responsible for the mishap.

Conceding illegal mining in Shivamogga, his native district, Yediyurappa said the quarry owner and two of his associates have been arrested for the explosion that occurred on Thursday night, and he would inspect the blast site on Saturday.

While police last night said at least six labourers in the truck were killed in the explosion that left the bodies dismembered beyond recognition, Yediyurappa told reporters that five people were dead.

Announcing an ex-gratia of Rs five lakh each to the families of the victims, he said a probe into the explosion was on and a team of officials, including those from bomb disposal, mines and geology departments, were on the job.

A clear picture on the casualty was expected to emerge soon with the authorities not ruling out the possibility of the death toll increasing, citing reports that there may have been more people at the site when the mishap occurred.

In a tweet, the Chief Minister said: "My deepest condolences to the bereaved family members. I wish a speedy recovery to the injured."

He told reporters here that he would direct the deputy commissioner of Shivamogga district to release a solatium of Rs five lakh to the families of the victims.

"Tomorrow I am going there. There are illegal mining activities going on. I will try to take steps to prevent the repetition of such incidents in future," he said.

Yediyurappa assured appropriate action against those responsible for the explosion, the cause of which was under investigation.

To a question on allegations of increase in illegal mining, he said such activities have been stopped at four to five places and stringent action would be initiated to end the menace altogether.

Yediyurappa's son and Shivamogga MP B Y Raghavendra has already visited the spot.

The booming sound of the blast initially made local people mistake it for an earthquake, and it was heard in nearby areas in neighbouring Davangere, Chikkamagaluru and Uttara Kannada districts too.

In Shivamogga, the effect was so severe with some houses developing cracks, while roof tiles and window panes were shattered to pieces. — PTI