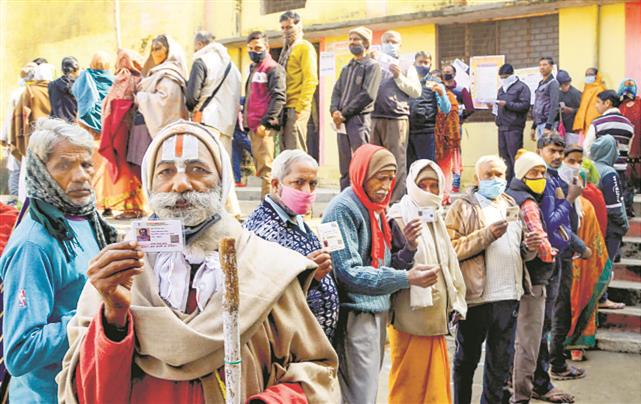 Voters carrying ID cards queue up outside a polling station in Vrindavan, Mathura, on Thursday. PTI

Polling ended peacefully in 58 constituencies during the first phase of the Assembly elections in Uttar Pradesh today. The Election Commission put the voting percentage at 60.17, which is about 1 per cent less than the figure for the 2017 Assembly elections. There were reports of technical snags in EVMs at some places, but voting was peaceful, sources said.

Additional Chief Election Officer BD Ram Tiwari said, “There were reports of technical snags in EVMs at some places. Such EVMs were immediately replaced.” On the Samajwadi Party’s allegation that poor voters were not allowed to exercise their franchise at Dundukheda village in the Kairana Assembly constituency, Tiwari said the district magistrate concerned was asked to look into the matter.

High voter turnout is crucial to the BJP achieving a comfortable majority in the state Assembly for the second successive time. In 2017, the BJP had won 53 of these 58 seats with an Opposition MLA joining it later.

Of the 11 districts that went to the polls, the polling in Baghpat, Bulandshahr, Muzaffarnagar, Shamli and Hapur was well above the overall percentage, while it was tepid in urban-dominated Gautam Buddh Nagar and Ghaziabad.

The polling percentage was around the overall average in Agra, Aligarh, Mathura and Meerut districts.

The fate of six ministers in the Yogi Adityanath Cabinet has been sealed in the first phase. They are Shrikant Sharma, Suresh Rana, Sandeep Singh, Kapil Dev Aggarwal, Atul Garg and Chowdhury Laxmi Narayan Singh. A report from Ghaziabad said a minor skirmish took place between the supporters of BJP leader VK Singh and Congress leader Rajan Kant, allegedly when the former addressed mediapersons and talked about the work done by the BJP within the premises of a polling station.

In all, 634 candidates, including 73 women, are in the fray for the first phase of elections. Leading the BJP’s campaign for the seven-phase Uttar Pradesh Assembly elections, Prime Minister Narendra Modi has been pitching for a double-engine government for fast-paced development, while attacking the Samajwadi Party-RLD combine. Union Home Minister Amit Shah and UP Chief Minister Yogi Adityanath have been trying to put the spotlight back on the alleged “exodus” of Hindus from Kairana before 2017, while SP president Akhilesh Yadav claimed the people have made up their mind to vote out the BJP. The poll pitch by SP-RLD alliance centres around farmers’ issues besides targeting CM Yogi Adityanath over poll promises. BSP chief Mayawati has been reminding the people of her government’s track record on law and order in the past.