In a separate encounter, police killed two criminals during a combing operation 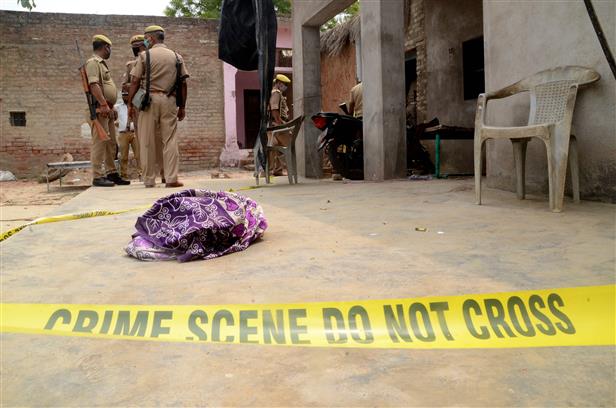 Police stand guard at a site following an attack where eight policemen have been shot, at Bikhru, some 30 km from Kanpur on Friday, July 3, 2020. (AFP)

Eight Uttar Pradesh Police personnel, including a Deputy Superintendent of Police, were killed and seven others injured in an encounter with criminals in Kanpur, officials said on Friday.

In a separate encounter, police killed two criminals during a combing operation.

The Inspector General of Police, Kanpur, Mohit Agarwal said: “Two persons identified as Prem Prakash Pandey and Atul Dubey were killed in a separate encounter in Nivada village and a pistol, which was taken away by criminals from policemen in the earlier encounter, was recovered.”

The first encounter took place when a police team was approaching to arrest Vikas Dubey, a history-sheeter facing 60 criminal cases, in Dikru village under the Chaubeypur police station on the intervening night of Thursday and Friday, police said.

As the police team was about to reach the hideout of the dreaded criminal, a hail of bullets was showered on them from a building rooftop, leaving Deputy Superintendent of Police Devendra Mishra, three sub-inspectors and four constables dead, the officials said.

Giving details of the incident, Uttar Pradesh Director General of Police HC Awasthi said the notorious criminal might have got an inkling of the impending raid.

Dubey’s henchmen put up massive roadblocks to prevent the police personnel from proceeding towards their hideout. As the police team was caught unawares, the criminals fired at them from a building rooftop leading to the deaths, Awasthi said.

On getting information about the incident, Additional DG (Law and Order), IG (Kanpur) and the SSP of Kanpur rushed to the spot, where a forensic team has started investigations.

Interacting with media persons, IG STF Amitabh Yash claimed that an automatic 30 spring rifle, which was seized from Dubey’s possession during his arrest by the STF in Lucknow in 2017, was used in the Friday’s attack on policemen.

The automatic rifle was released in someone’s favour by a Lucknow court, he added.

“We will investigate under which circumstances the automatic rifle was released in someone’s else favour,” Yash said.

Dubey, who was carrying a cash reward of Rs 25,000 on his head, was arrested by the STF from Krishna Nagar in 2017. The STF had seized an automatic 30 spring rifle and a number of cartridges from Dubey’s possession.

The state police chief said seven policemen were also injured in these encounters and they have been rushed to a hospital.

A combing operation is on and the entire area had been sealed, he said.

Chief Minister Yogi Adityanath paid tributes to the slain policemen and conveyed his heartfelt condolences to their family members. According to a government spokesperson, the Chief Minister directed the police chief to take stringent action against the culprits and collect the detailed report from the spot immediately.

The Opposition parties in Uttar Pradesh, including the Congress, the BSP and the Samajwadi Party, on Friday, lashed out at the Yogi Adityanath government, saying no one was safe in the state.

“Eight policemen were martyred while they went to nab criminals. I pay my condolence to the family of the martyrs. In UP, law and order has become very bad and criminals have no fear. From common man to policemen, no one is safe,” she said.

“The responsibility of law and order is with the chief minister. He should initiate strict action and there should be no laxity in it,” she added.

Congress leader Rahul Gandhi tweeted: “Another proof of ‘goonda raj’ in UP. When police are not safe how can people be? My condolences are with the family of martyrs and I wish speedy recovery of injured.”

Samajwadi Party supremo Akhilesh Yadav said: “The BJP government in UP is doing ‘natak’ (drama) of small encounters in fear that it stands exposed. This will affect the morale of the force and their anger will increase. The government should immediately announce compensation and secure family members (of martyrs).”

“In ‘rogi sarkar’ ‘jungle raj’, UP has become ‘Hatya Pradesh’, wherein Kanpur criminals patronised by those in power attacked policemen killing eight of them,” the party said in a tweet.

While condoling the deaths, the SP has demanded an “immediate announcement of Rs 1 crore each for the martyred policemen’s families”.

It also demanded that the alleged “connection (of criminals) with those in power should be exposed”.

BSP supremo Mayawati termed the incident as “shameful and unfortunate”, and added that “it is clear that the UP government needs to be more alert on law and order issue”.

“Those involved should not be spared by the government at any cost even if a special campaign is needed for that. The family of those who died should be given financial help and a job should be given to one member of their family. This is the demand of the BSP,” the former Uttar Pradesh Chief Minister said in a tweet. PTI