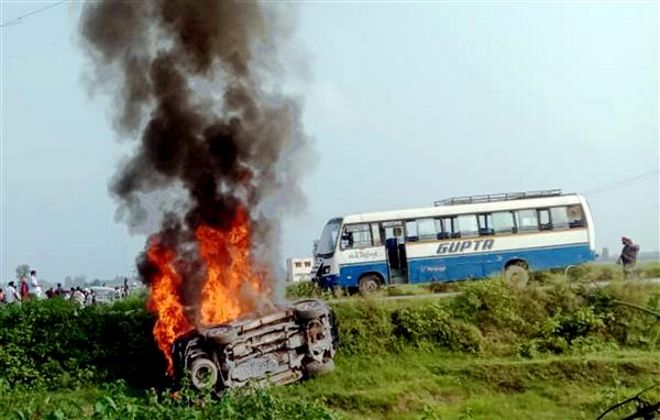 The Supreme Court on Wednesday granted an eight-week interim bail to Union Minister Ajay Kumar Mishra’s son Ashish Mishra in the Lakhimpur Kheri case in which eight persons had died during the 2021 farmers’ protest.

Four farmers were mowed down by an SUV in Lakhimpur Kheri when those against farm laws were holding a demonstration against Uttar Pradesh Deputy CM Keshav Prasad Maurya’s visit on October 3, 2021. In the subsequent violence, two BJP workers, a driver and a journalist were killed. It was alleged that Ashish was sitting in one of the cars. A Bench led by Justice Surya Kant, which had on January 19 reserved its order on Ashish’s bail plea, asked him to leave Uttar Pradesh within a week of his release subject to his furnishing bail bonds to the satisfaction of the trial court. “We are… of the view that it is imperative to balance the rights of the petitioner’s liberty emanating under Article 21 vis­-a-­vis the state’s right to ensure a fair and proper trial and safeguard the legitimate outcry of the victim(s) of crime,” said the Bench, which also included Justice JK Maheshwari.

Ashish shall surrender his passport to the trial court within a week of his release and he shall not enter Uttar Pradesh, except to attend the trial proceedings, inform the trial court about his location and mark his attendance in the police station of the jurisdiction of his location, it said.

The Bench said Ashish shall appear before the trial court on every date of hearing and no adjournment shall be sought on his behalf. “If the petitioner is found involved in prolonging the trial, it shall be taken as a valid ground to cancel the interim bail,” it said.

“The question as to who were the aggressors or responsible for the unfortunate ghastly incident would be ascertained only after a full-­fledged trial,” the Bench said. Awaiting the trial court’s report on the status of witnesses being examined, it posted the matter for March 14. After examining his conduct, the top court would decide on extending his bail.

“It is about balancing the rights of parties. There should not be indefinite incarceration,” the Bench had said on January 19. The trial judge had informed the top court that it might take five years to conclude the trial as there were 208 prosecution witnesses, 171 documents and 27 forensic laboratory reports to be examined.

A Lakhimpur Kheri court had on December 6 framed charges against Ashish and 12 others for murder, criminal conspiracy and certain other offences in the case. Virendra Shukla, the 14th accused, who is out on bail, has been charged under Section 201 of the IPC for causing disappearance of evidence.

The UP Government and the victims’ families had opposed Ashish’s bail plea on the ground that it was a grave and heinous crime and granting bail would send a wrong signal to society while Ashish’s counsel had argued that he had no criminal antecedents; he had been in custody for more than a year; and the trial was likely to take seven-eight years.