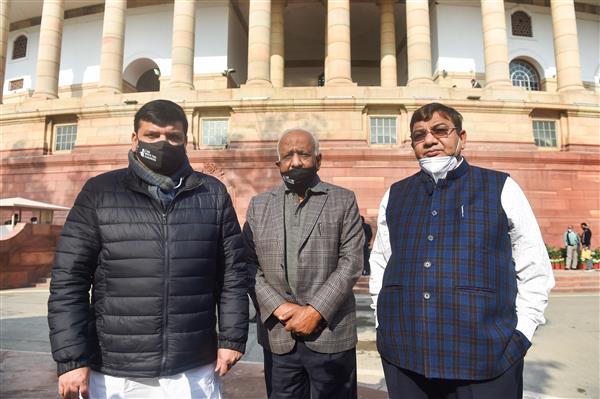 Rajya Sabha Chairman Venkaiah Naidu on Wednesday named all the three members of AAP under Rule 255 of the House for causing disruption of proceedings.

When they defied the order under the rule, Naidu called in the Marshal to "help" them "leave" the House.

The three, Sanjay Singh, Sushil Gupta and ND Gupta, were raising slogans during the Zero Hour proceedings demanding the withdrawal of the three farm laws.

Rule 255 entails the Member named to withdraw from the House forthwith after being named by the Chair.

They continued to remain in the House and raised slogans after being called out, and in spite of repeated direction from Naidu to them to abide by the rule.

Rule 255 says: "The Chair may direct any member whose conduct is in his opinion grossly disorderly to withdraw immediately from the Council and any member so ordered to withdraw shall do so forthwith and shall absent himself during the remainder of the day's meeting."

The AAP Members caused disruptions of the proceedings in spite of the Chair upholding suggestions by the Parliamentary Affairs Minister Pralhad Joshi and Leader of the Opposition Ghulam Nabi Azad to extend the duration allotted time for discussion on Motion of Thanks on President's Address from 10 hours to 15 hours, out of which five hours would be devoted to the farm laws.

Joshi made the suggestion after he met Azad and other leaders of opposition parties outside the House before it assembled for the day's proceedings.

The House was adjourned on Tuesday, without conducting business due to the disruptions by opposition benches, which pressed for suspension of business of the House to discuss on the farm laws and farmers' protests.

While making a suggestion to extend the duration of the allotted time for discussion on the Motion of Thanks on President's Address, Azad acknowledged that the rules do not allow for the conduct of any other business before it (Motion of Thanks).

Hence, the middle ground that duration on the Motion is increased to include discussion on the farm laws.

Naidu on Wednesday expressed concern over some Members in the House, and journalists flouting Rules to bring in cellular phones in the House, record its proceedings and then circulate them on social media platforms.

He noted that such acts are "unlawful" and "unwarranted",

"It is unauthorised", Naidu said.