‘Let me see,’ says CJI on urgent listing the matter for hearing 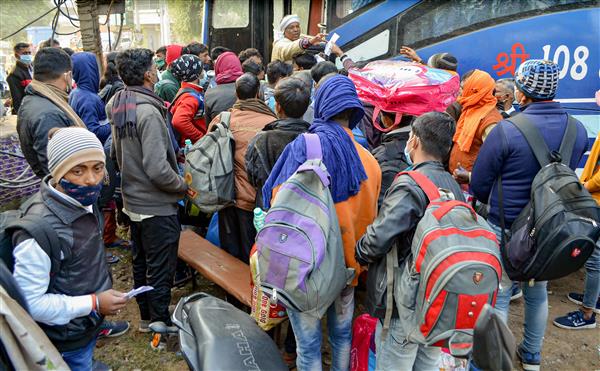 Migrants wait to board interstate buses as cases of Covid-19 rise in the NCR region, in Gurugram. PTI file

As third Covid-19 wave hits India leading to certain curbs being imposed in several parts of the country, a fresh plea has been filed in the Supreme Court seeking implementation of its order to ensure food security and other welfare measures for distressed migrant workers.

In an interim application filed in the top court, activists Anjali Bharadwaj, Jagdeep Chhokar and Harsh Mander sought directions to the Centre to file a status report detailing the compliance of directions given in the top court’s June 2021 verdict.

The top court had on June 29, 2021 had ordered states and Union Territories to frame schemes for providing free dry ration to them till the pandemic lasted. It had directed the Centre to allocate additional food grains for the purpose.

Seeking urgent listing of the matter, advocate Prashant Bhushan told a Bench led by Chief Justice of India NV Ramana on Wednesday that the court had taken suo motu cognizance of the matter in 2020 and issued directions for delivery of dry ration and as well as setting up community kitchen.

“Seven months have elapsed and no directions have not been implemented and now again because of this Omicron and the curbs like lockdown, migrant labourers are again facing the severe crisis,” Bhushan submitted.

The three activists have sought compliance of the direction to the authorities to undertake an exercise under the National Food Security Act, 2013 to re-determine the total number of persons to be covered under the free ration scheme. They also sought details of food grains provided by the Centre to the states for implementing the food schemes for migrant workers.