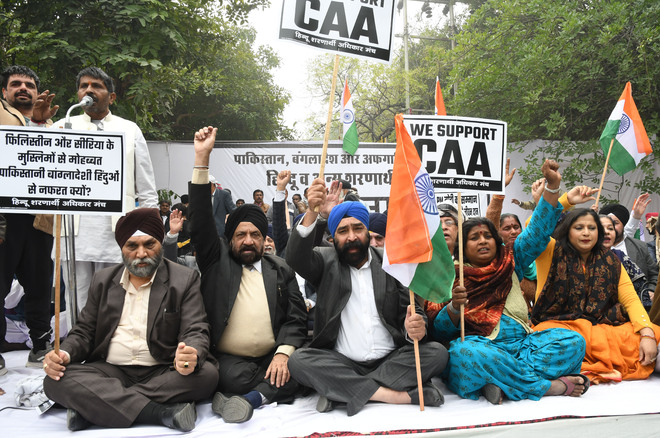 Refugees from Pakistan, Bangladesh and Afghanistan display placards in the support of CAA in New Delhi recently. Tribune photo

Pyara Singh, who fled to India along with his family members from Afghanistan post 1992 in the wake of Taliban terrorists having expanded their tentacles, is a disappointed due to the opposition to the Citizenship (Amendment) Act which gives citizenship to religious minorities from Pakistan, Afghanistan and\ Bangladesh.

“I came to India under compelling circumstances with a tender feeling of getting welcome here, but the opposition to the CAA has disheartened me,” said Pyara Singh.

Settled in Tilak Nagar along with other Sikh migrants from Afghanistan, Pyara Singh position in Afghanistan deteriorated in the wake of ascendancy of the Taliban.

“I had to take a call to either accept forced conversion to Islam, or save my family from religious persecution,” he said, adding that seeking refuge in India was the only resort for him and many other families.

The Sikhs in Afghanistan had to live as less than second class citizens. He family’s avocation was farming, but had to part with major portion of the profits, he said.

He wondered why the Congress did a volte-face on the CAA when it had earlier supported the idea. Its party leaders including former Delhi Chief Minister Sheila Dikshit had assured the Sikh migrants regarding citizenship.

He appealed to political parties to give up their opposition to the citizenship law on ground that It was not against any community.

He cautioned that the refugees would hit the streets against opponents of the CAA. “We will come out on the streets in support Narendra Modi on the law,” he said.