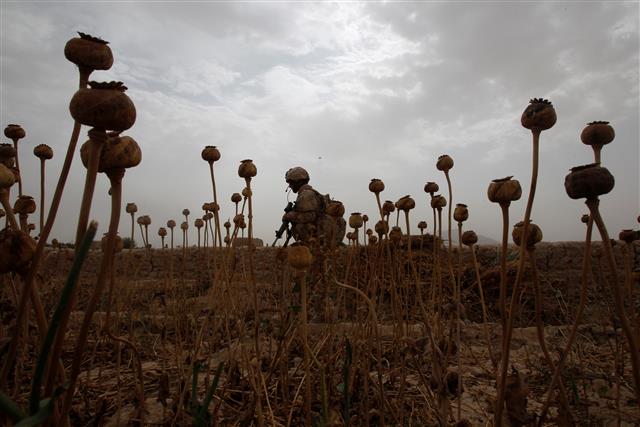 A Canadian soldier from the 6th Platoon, Bulldog Company, 1st Battalion, 22nd Royal Regiment walks through a poppy field during a patrol in the Panjwai district of Kandahar province southern Afghanistan June 13, 2011. Reuters/File

The huge consignment of heroin confiscated at Gujarat's Mundra port was intended to reach Delhi and not Vijayawada, a senior Andhra Pradesh Police official said on Monday.

Vijayawada Police Commissioner B Sreenivasulu's clarification came amid reports that a city-based firm is under probe by the Directorate of Revenue Intelligence (DRI) in connection with the drug haul.

The DRI reportedly seized 2,988.22 kg of the banned substance with an estimated street value of Rs 2,000 crore at Mundra Port on Wednesday.

The contraband was mixed with talc stone powder, and packed in two containers. The consignment originated from Afghanistan, and shipped to Gujarat from Iran's Bandar Abbas Port. The GST number used for consignment allegedly belonged to a company registered in Vijayawada, with its office on Gadiyaramvari Street at Satyanarayanapuram.

The Police Commissioner said on verification with the investigating agencies, it was learnt that Govindaraju Durga Purna Vaishali, a resident of Chennai, had taken GST registration in August 2020 on the address D No 23-14-16, Satyanarayanapuram. Machavaram Sudhakar, a resident of Chennai, is the husband of Vaishali. The building is owned by Vaishali's mother Govindaraju Taraka.

"It is learnt that Vaishali has taken an import and export license (IEC Code) from Director General of Foreign Trade (DGFT) for export and import purpose. It is also learnt that both wife and husband (Sudhakar and Vaishali) have been residing in Chennai for the past many years," he said.

"The smuggled heroin in the guise of talcum powder that landed at Mundra Port is intended to reach Delhi, but not to Vijayawada as alleged in some sections of media. So far no activity except using the Vijayawada house address for obtaining above licenses has come to notice. However, further enquiries are being conducted," he added.

It was learnt that investigating agencies conducted raids and searched in Ahmedabad, Delhi, and Chennai etc.

According to sources, a team of DRI officials conducted a raid in a house located at Sector 135 in Greater Noida on late Sunday night.

During the raid, the officials recovered approximately 22 kg of heroin and cocaine and arrested the accused duo.

Notably, a day before, the DRI recovered 3,000 kg of Afghan heroin worth approximately Rs 21,000 crore in the international market from two containers at Mundra port in Gujarat.

Following the Taliban's takeover of Afghanistan, the security agencies in India are on alert and have already done multiple meetings to discuss the impact in terms of drugs smuggling and infiltration.