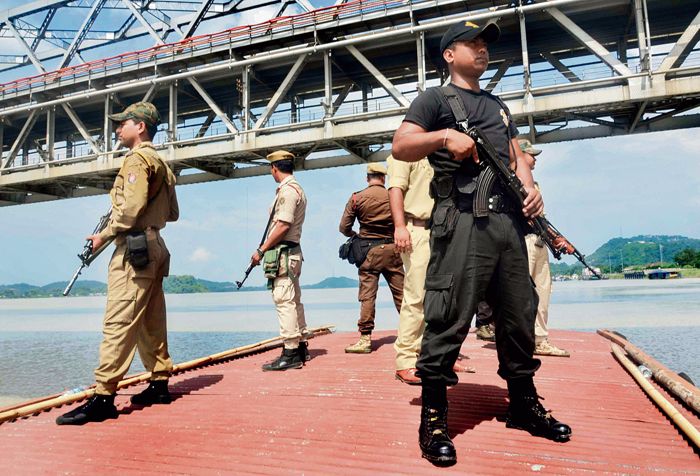 In a major goodwill gesture to the people of north-eastern states, the government today announced a reduction in the disturbed areas under the Armed Forces Special Powers Act (AFSPA) in Nagaland, Assam and Manipur from April 1.

In a major goodwill gesture to the people of north-eastern states, the government today announced a reduction in the disturbed areas under the Armed Forces Special Powers Act (AFSPA) in Nagaland, Assam and Manipur from April 1. The decision has come after several decades of the imposition of the Act.

Announcing this on Twitter, Union Home Minister Amit Shah said: “In a significant step, Government of India under the decisive leadership of PM Narendra Modi has decided to reduce the disturbed areas under the Armed Forces Special Powers Act (AFSPA) in the states of Nagaland, Assam and Manipur after decades.”

Shah said the reduction in areas under AFSPA was the result of “the improved security situation” and “fast-tracked development” due to the consistent efforts and several agreements to end insurgency and bring lasting peace in the North-East by the Modi government.

“Thanks to the PM’s unwavering commitment, our north-eastern region, which was neglected for decades, is now witnessing a new era of peace, prosperity and unprecedented development. I congratulate the people of the North-East on this momentous occasion,” he said in one of his Twitter posts.

The move comes three months after the Central government constituted a high-level committee to examine the possibility of lifting the Act in Nagaland where 14 civilians were killed in December 2021 in a botched anti-insurgency operation. A Home Ministry spokesperson, however, said AFSPA has not been completely withdrawn from the three insurgency-hit states. It will continue to be in force in some areas of the three states.

AFSPA has been in force for decades in the three north-eastern states to assist the armed forces operating there to tackle insurgency. The Act empowers security forces to conduct operations and arrest anyone without a prior warrant, besides giving immunity from arrest to the security forces if they shoot someone.

The Act was imposed in Assam in 1990. Due to significant improvement in the situation, it is now being removed completely from 23 districts and partially from one district of Assam. It has been in force in the entire Manipur (except Imphal municipality area) since 2004. Now, 15 police station areas of six districts of Manipur will be excluded from the disturbed area notification.

In case of Nagaland, AFSPA was imposed in 1995. It is now being withdrawn from 15 police station areas in 7 districts. Welcoming the “historic” move, Assam Chief Minister Himanta Biswa Sarma said, “I wholeheartedly welcome the decision to withdraw AFSPA from all areas of Assam barring nine districts and one subdivision”. “This decision will lead to a new era of peace, prosperity and development in Manipur yet again,” said Manipur CM N Biren Singh in a series of tweets. Assam and Manipur have BJP governments.

“This is a significant development towards bringing stability, security and prosperity to the North-East region,” Nagaland Chief Minister Neiphiu Rio, whose Nationalist Democratic Progressive Party is a BJP ally, tweeted.

AFSPA completely lifted from Tripura in 2015, Meghalaya in 2018 | In 2015, imposed in Arunachal. Currently in 4 districts