Centre tells states to reserve 70% of supplies for second dose 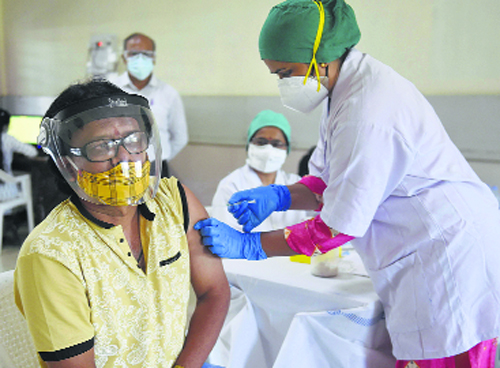 A railway employee being inoculated in Mumbai on Tuesday. PTI

After Uttar Pradesh became the first Indian state to float a global tender to procure 400 lakh doses of Covid vaccine within six months, Maharashtra, Delhi and Uttarakhand are also considering jab imports to tide over shortages at home.

Maharashtra Home Minister Rajesh Tope on Tuesday said direct import from foreign manufacturers was being discussed by the state and a decision would be taken soon. Tope’s remarks came a day after state Tourism Minister Aditya Thackeray said global procurement of vaccines was a viable option and would mean Mumbai could be inoculated in three weeks.

Drug controller had on May 5 issued guidelines for states and private entities to import vaccines not licensed for use in India but authorised by regulators of the US, UK, EU and for those on WHO emergency use list.

Kejriwal said this would help acquire a national safety net ahead of the third wave and could be done by invoking relevant provisions of the Patents Act and issuing compulsory licences to firms. A royalty from the profits of manufacturers could be given to Bharat Biotech and Serum Institute, said Kejriwal. The Congress had made a similar demand earlier.

Uttarakhand too has written to the Centre asking if they could directly import vaccines; this on a day when Andhra Pradesh CM YS Jagan Mohan Reddy wrote to the PM urging transfer of Covishield and Covaxin technologies to other jab manufacturers under the Patents Law. Reddy said at the current pace, it may take several months to get everyone vaccinated.

The Centre, meanwhile, held a vaccine review meeting with states asking them to prioritise second doses and reserve 70 per cent stocks provided free of cost by the government of India for the second doses.

Health Secretary Rajesh Bhushan said, “There is an urgent need to address a large number of beneficiaries waiting for the second dose. States can reserve at least 70 per cent of the vaccines supplied to them from the Government of India channel (free of cost) for second dose vaccination and remaining 30 per cent for first dose.” A pre-bid meeting for the UP Government’s global tender for Covid vaccines is expected to be held tomorrow.