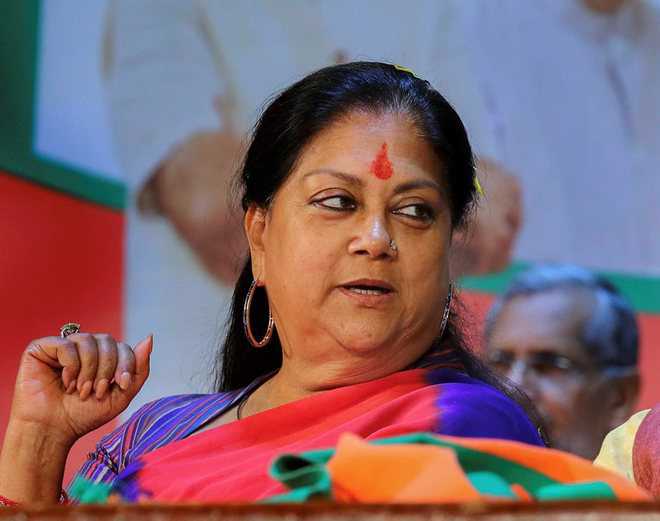 Former Chief Minister Vasundhara Raje too has got active and met top party leaders such and JP Nadda and Rajnath Singh in New Delhi.

Ahead of the Rajasthan Assembly session on August 14, there appears to be a subtle change in the political strategy of the Opposition BJP in the state ruled by the Congress' Ashok Gehlot government.

The saffron party has convened its legislature party meet in Jaipur on August 11. Leader of Opposition Gulab Chand Kataria has written to legislators regarding the meeting at 4 pm, according to reports.

Interestingly, the development comes after the Rajasthan BJP shifted some MLAs to Gujarat to safeguard its flock against "poaching”. Former Chief Minister Vasundhara Raje too has got active and met top party leaders such and JP Nadda and Rajnath Singh in New Delhi.

She apparently expressed displeasure over certain decisions taken by the state organisation. Sources say she assured the leadership that she will stand with the party, but "won't compromise on her self-respect". It seems the former CM has been told that she will be a part to any decision taken by the BJP regarding Rajasthan.

While in Delhi, she also met general secretary (orgnasiation) BL Santosh.  Even though the politics was in full force in the desert state, Raje maintained a low profile, also skipping meetings called by state president Satish Poonia.

Poonia on Saturday said MLAs would be taken to Gujarat, alleging that CM Gehlot “who does not have the strength to save his government” was trying to “to influence, poach and harass” them using the state police and administration.

Interestingly, till then it was Gehlot who had been accusing the BJP of “horse-trading” and trying to “poach” Congress MLAs to topple his government in Rajasthan.

The Congress imbroglio in Rajasthan has also brought into open factionalism and contours of different groups within the BJP.

While BJP leaders say “it is just a matter of time” before the Gehlot government falls under its own weight, the fact is the long gap before the Assembly session on August 14 have given rise to multiple possibilities.

There appears to be a clear “directive” from Nagpur that the person occupying the top post should be from saffron party, Sangh ‘parivaar’, its background and ideology.

Therefore, if the Gehlot government fails, the next big question is “who will become the Chief Minister”.

The fact is in states like Madhya Pradesh, Gujarat and Rajasthan, there is no dearth of in-house talent from the Sangh background in the BJP.

In those terms, Congress rebel Sachin Pilot “certainly does not fit the bill” despite what Poonia had said a few days ago. “Sachin Pilot revolted to become the Chief Minister... there is a history in the country that those who have fewer MLAs go on to become Chief Ministers,” Poonia was quoted as saying.

Though Raje is said to have the support of around 40 MLAs, there are others in the running, including Union Ministers Gajendra Singh Shekhawat and state leaders like Om Mathur and Satish Poonia with their large network of party cadres and "Nagpur" connections.

Leader of Opposition Gulab Chand Kataria is another hopeful, though he is above 75 years in age.