Ailing artillery gun programme back on track : The Tribune India 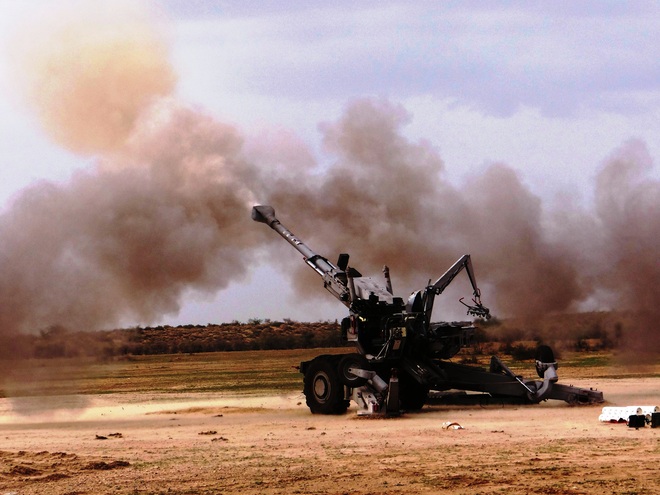 The first regiment of Dhanush has been inducted into the Army.

India’s artillery gun programme that had been ailing in the aftermath of the Bofors gun purchase in the 1980s is now on track. As of now, three different types of indigenous guns are being inducted and possibly there will no more imports as New Delhi looks inwards to arm itself.

In March, the first batch of 18 ‘Sharang’ upgraded artillery pieces will be inducted. A total of 300 of the 130 mm guns of Soviet parentage are being up-gunned to 155 mm by the Ordnance Factory Board (OFB). The entire lot will be supplied by 2022.

The projection includes 814 truck-mounted guns, 1,580 towed guns, 100 tracked self-propelled guns, 180 wheeled self-propelled guns and 145 ultra-light howitzers. Two other guns form the 155 mm pool of towed artillery guns. A total of 144 pieces of “Dhanush”, an upgraded version of the Swedish 155 mm Bofors howitzers, are being made by the OFB. The first regiment of Dhanush artillery guns has been inducted into the Army.

The advanced towed artillery gun system (ATAGS), developed by the DRDO along with the Army, is a fully indigenous 155mm/52 calibre weapon.

The Defence Acquisition Council of the MoD okayed the need of 150 indigenously developed ATAGS at an approximate cost of Rs 3,364 crore. A simple calculation means India will soon have 775 artillery guns of its own.