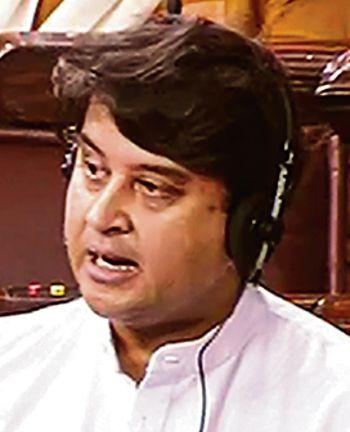 Civil Aviation Minister Jyotiraditya Scindia on Monday informed the Rajya Sabha that air cargo has grown up to 19 per cent despite the Covid-19 pandemic and domestic freighters in country increased from 8 to 28. Responding to a supplementary question in the House, he said all Indian carriers faced a period of insolvency because of the Covid-19 pandemic, but because of PM Narendra Modi's call for Atmanirbhar Bharat, Indian carriers have been able to stand. TNS

Infrastructure costs incurred in the mining of cryptocurrencies or any virtual digital asset is not permitted as deduction under the IT Act. The government will shortly come out with a definition of virtual digital assets with a view to levy 30 per cent tax on income from the transfer of such assets, Minister of State for Finance Pankaj Chaudhary said in a written reply to the LS. TNS

As the National Defence Academy, Pune, and the Naval Training Academy at Ezhimala, Kerala, opened up for women cadets, as many as 1,16,891 women have appeared in examination across the country during 2021. The Ministry of Defence gave out the figures in the Rajya Sabha in a written reply on Monday. TNS

VK Singh, MoS for Civil Aviation, told the Rajya Sabha that 22,500 Indians have returned from Ukraine to India between February 1 and March 11, 2022, as the government operated 90 evacuation flights, including 14 IAF flights.