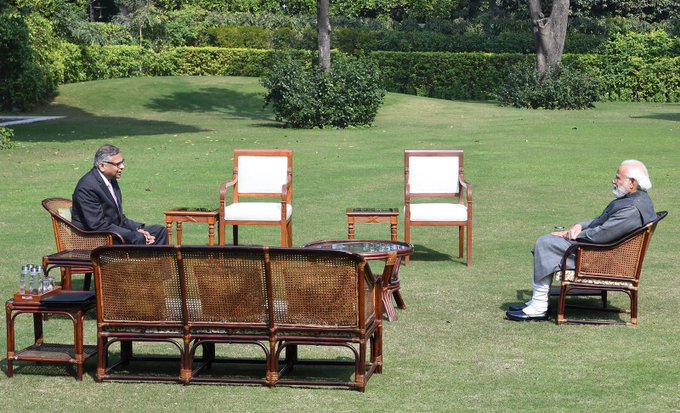 The process of Air India disinvestment got completed on Thursday with the government officially handing over the management control of the airlines to Talace Private Limited, a subsidiary of the Tata Group’s holding company.

After taking over the airlines, Tata Sons Chairman N Chandrasekaran, who met Prime Minister Narendra Modi earlier in the day said, “We are totally delighted to have Air India back at the Tata group and are committed to making this a world-class carrier.”

Announcing about the event in one of his Twitter posts, Secretary, Department of Investment and Public Asset Management (DIPAM) Tuhin Kanta Pandey said, “The strategic disinvestment transaction of Air India successfully concluded today with transfer of 100 per cent shares of Air India to M/s Talace Pvt Ltd along with management control. A new Board, led by the Strategic Partner, takes charge of Air India.”

After a competitive bidding process, the government had on October 8 last year sold Air India to Talace Private Limited, a subsidiary of the Tata Group’s holding company, for Rs 18,000 crore.

As a part of the deal, the Tata group has also been handed over Air India Express and a 50 percent stake in ground handling arm Air India SATS.

Tatas had beat the Rs 15,100-crore offer by a consortium led by SpiceJet promoter Ajay Singh and the reserve price of Rs 12,906 crore set by the government for the sale of its 100 per cent stake in the loss-making carrier.

While this will be the first privatisation since 2003-04, Air India will be the third airline brand in the Tata Group’s stable — it holds a majority interest in AirAsia India and Vistara, a joint venture with Singapore Airlines Ltd.

At present, Air India controls over 4,400 domestic and 1,800 international landing and parking slots at domestic airports as well as 900 slots abroad. Out of Air India’s 141 aircraft that Tatas would get, 42 are leased planes while the remaining 99 are owned.

Air India was started by the Tata Group in 1932 by JRD Tata. But, after the country’s independence, the then government led by Prime Minister Jawaharlal Nehru had nationalised the airline in 1953.