Says long-term exposure to outdoor and household air pollution contributed to over 1.67 million annual deaths in India in 2019 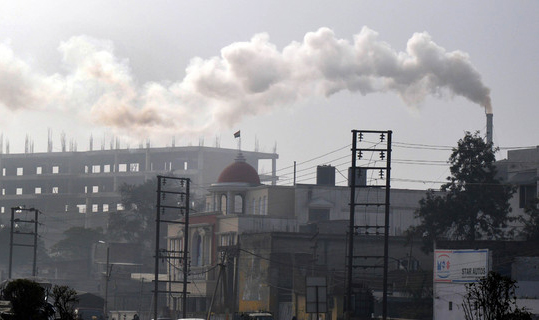 The first-ever comprehensive analysis of air pollution's global impact on newborns finds that outdoor and household particulate matter pollution contributed to the deaths of more than 1,16,000 Indian infants in their first month of life in 2019, a new global study on Wednesday.

The report, State of Global Air 2020, said more than half of these deaths were associated with outdoor PM2.5 and others were linked to use of solid fuels such as charcoal, wood, and animal dung for cooking.

For the youngest infants, most deaths were related to complications from low birth weight and preterm birth.

Overall, air pollution is now the largest risk factor for death among all health risks, according to the annual State of Global Air 2020 report published by the Health Effects Institute (HEI).

The HEI is an independent, nonprofit research institute funded jointly by the US Environmental Protection Agency, industry, foundations, and development banks.

India, Bangladesh, Pakistan and Nepal feature among the top 10 countries with the highest PM2.5 exposures in 2019; all of these countries experienced increases in outdoor  PM2.5 levels between 2010 and 2019.

Use of solid fuels for cooking, however, presents a pattern of moderate success. Since 2010, more than 50 million fewer people have been exposed to household air pollution.

More recently, the National Clean Air Programme has spurred action on major air pollution sources in cities and states around the country.

This report comes as Covid-19, a disease for which people with heart and lung disease are particularly at risk of infection and death, has claimed more than 110,000  lives in India.

Although the full links between air pollution and Covid-19 are not yet known, there is clear evidence linking air pollution and increased heart and lung disease creating  a growing concern that exposures to high levels of air pollution, during winter months in South Asian countries and East Asia, could exacerbate the effects of Covid-19.

"An infant's health is critical to the future of every society, and this newest evidence suggests an especially high risk for infants born in South Asia and sub-Saharan Africa," said HEI President Dan Greenbaum.

"Although there has been slow and steady reduction in household reliance on poor-quality fuels, the air pollution from these fuels continues to be a key factor in the  deaths of these youngest infants," he added.

Infants in the first month of life are already at a vulnerable stage. But a growing body of scientific evidence from multiple countries, including recent ICMR-supported  studies in India, indicates that particulate air pollution exposure during pregnancy is linked to low birth weight and pre-term birth.

These latter conditions, both of which are associated with serious complications, already account for the vast majority of deaths in the neonatal period (4,55,000 in  2019).

The new analysis reported in the State of Global Air this year estimates that nearly 21 per cent of neonatal deaths from all causes are attributable to ambient and household  air pollution.

"Addressing impacts of air pollution on adverse pregnancy outcomes and newborn health is really important for low- and middle-income countries, not only because of the  high prevalence of low birth weight, preterm birth, and child growth deficits but because it allows the design of strategic interventions that can be directed at these vulnerable groups," said Kalpana Balakrishnan, an air pollution and health expert who was  not involved with the study.

The State of Global Air 2020 annual report and accompanying interactive website are designed and implemented by the HEI in cooperation with the Institute for Health  Metrics and Evaluation at the University of Washington, and the University of British Columbia.

Its findings are based on the Global Burden of Disease Study published in the international medical journal, The Lancet, on October 15. — IANS