Aishe Ghosh, 19 others named in FIR in JNU violence case 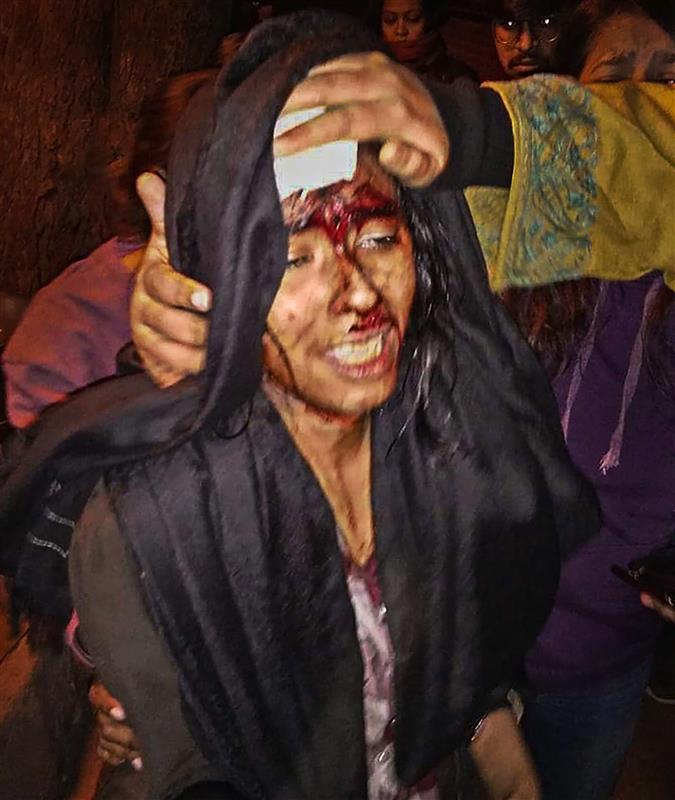 Delhi Police have filed an FIR against JNUSU president Aishe Ghosh and 19 others for vandalising the server room on the JNU campus.

Ghosh, who appeared on national TV on Sunday evening with a blood-soaked face and with a bandage on Monday, is now been alleged to have played a key role in the violence in JNU, which took place on Sunday.

She has been booked under Sections 341, 323 and 506 of the IPC and various sections of the Prevention of Damage to Public property Act. Apart from her, Saket Moon, Satish Yadav, Sarika Chaudhury, among others, have been named in the FIR.

Read more: A PM who doesn't speak when students are beaten up is either complicit or incompetent: CPM

The cops earlier registered four FIRs in the JNU violence that shook the national capital on Sunday. Delhi Police said one FIR was registered on January 4 on the complaint of the JNU administration regarding obstruction in the registration process. The students had to register for next semester admission which was allegedly blocked by some students. The second and third FIRs were registered regarding scuffle and obstruction in the registration process on January 4.

The fourth FIR was registered on January 6 for arson against unidentified people for their alleged role in the JNU violence that took place on Sunday.

Police took a suo motu cognisance of the violent incident and registered the fourth FIR at Vasant Kunj police station in southern part of the national capital.

Inspector Anand Yadav in the fourth FIR stated: :The students had been protesting on the campus for last few days over fee hike and other issues inside the university premises and as per the the Delhi High Court direction of not allowing any student to carry out protest within the radius of 100 metres of administrative blocks, police had been deployed permanently over there.”

The FIR states that at 3.34 p.m. they came to know that some students had indulged in clashes and were damaging public properties outside Periyar hostel. “We rushed to the spot and found that 40 to 50 unidentified people, a few of them covering faces with handkerchiefs and masks, and carrying sticks and rods were beating up other students inside and outside the hostel,” Yadav said in the FIR.

He said they were damaging the properties and beating up students. Yadav said he and his team rushed to the spot and asked them to maintain peace. “As soon we reached, these unidentified people fled from the spot,” Yadav said.

To control the situation inside the premises of the campus, the Jawaharlal Nehru University gave a written approval to the police to enter the hostel premises within the university campus.

After getting the request letter from the JNU authorities, more police teams were called in to manage the violent situation within the premises. “We requested the students to maintain peace and not to indulge in violence,” he said.

In the meantime, police control room started receiving distress calls from inside the campus from the students about being beaten up.

“At 7 pm, we came to know that around 40 to 50 unidentified people entered the Sabarmati Hostel and started beating up students and damaging properties,” the FIR stated.

Police teams immediately reached the spot and found that around 40 to 50 students-cum-hooligans were damaging the properties of the hostel.

“We made announcement to maintain peace and not to indulge in violence and immediately leave the premises. The hooligans continued damaging the properties but as we pressed in, they fled from the spot,” Yadav said in the FIR.

The FIR said that thereafter the injured students were identified and rushed to the AIIMS trauma centre, AIIMS hospital and Safdarjung Hospital.

“The uncontrolled mob damaged the properties and thereafter fled the spot,” the FIR stated. IANS