Akhilesh said rivers of blood will flow over Article 370 revocation, but not a stone was thrown: Amit Shah : The Tribune India

Akhilesh said rivers of blood will flow over Article 370 revocation, but not a stone was thrown: Amit Shah

Shah warned voters in Uttar Pradesh that if ‘mafia rule’ comes in state, people will hesitate to invest in defence corridor in Aligarh 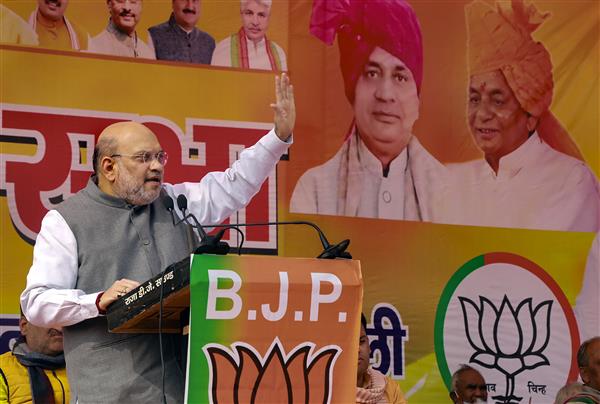 Union Home Minister Amit Shah on Wednesday targeted Samajwadi Party chief Akhilesh Yadav for his alleged remarks that “rivers of blood” would flow over the revocation of Article 370 in Jammu and Kashmir but no one had the courage to “throw even a stone” over the decision.

Shah warned the voters in Uttar Pradesh that if “mafia rule”—apparently referring to the Samajwadi Party—again comes in the state, people will hesitate to invest in the defence corridor in Aligarh, announced by Prime Minister Narendra Modi in 2018.

“He (Akhilesh) stood in front of me and said due to the decision (revoking Article 370) ‘khoon ki nadiya bahengi’ (rivers of blood will flow) but Akhilesh Babu leave that river of blood no one had the courage to throw even a ‘kankad’ (stone). Narendra Modi has secured the nation now,” Shah said.

He was addressing a rally in support of party candidate in Uttar Pradesh polls Sandeep Singh, former UP CM Kalyan Singh’s grandson, in Atrauli, Aligarh.

Shah also hit out at the BSP and the Congress for opposing the abrogation of Article 370, which gave special status to Jammu and Kashmir, due to “vote bank” politics.

“Had SP, BSP, Congress been in power, will they ever had withdrawn Article 370 in Jammu and Kashmir? When Modi ji became PM for the second time, he withdrew it (Article 30) on Aug 5, 2019. Akhilesh Yadav was against it. Why you do such vote bank politics?” he said.

Shah asserted that the general elections in 2014 and 2019 and the assembly polls in 2017 were for “changing the fortune (kismat) of Uttar Pradesh”.

He said the SP and the BSP “gripped with casteist thinking” could never do any good for the state.

“During SP and BSP rule, goondas (criminals) used to harass people and police used to run away from them, but under (CM) Yogi Adityanath regime, criminals and mafias are migrating out of the state,” he said.

Shah alleged that the SP, the BSP and the Congress cannot rule in a “transparent and corruption-free” manner “Only the BJP and lotus symbol could give corruption-free government under the leadership of Modi.” “If you search for mafia, you can see it at three places in UP: one is visible in jail, second outside UP and third you will see in the list of candidates of Samajwadi Party,” Shah said.

Shah warned the voters that if the “mafia rule” comes, then the defence corridor that PM Modi has brought in Aligarh, where crores are to be invested, no one will come for investment there.

Polling will be held in Atrauli on February 10 in the first phase. BJP stalwart Kalyan Singh had represented this seat many times.

On his relations with Kalyan Singh, Shah said, “In 2013, when I was sent as the in-charge of UP, I had visited Lucknow and Varanasi. I sought time from ‘Babuji’ (Kalyan Singh), he invited me for food at home and like a father held my finger and taught me about Uttar Pradesh politics.” Kalyan Singh was the person who first talked about giving the backward society its due right, he said.

The Union Home minister said for ‘Ramjanmbhoomi’, Kalyan Singh had resigned as the chief minister and “our PM (Modi) has laid the foundation of Ram temple”.

Shah urged the people to once again vote the Yogi Adityanath government to power and also ensure the victory of Sandeep Singh.

Alleging that Akhilesh Yadav misled people on Covid vaccine, Shah said, “He used to say it’s BJP’s vaccine, I will not get it administered. He misled people of UP and the country. He, however, out of fear got the vaccine administered himself.” “Had you all not taken the vaccine, would you be able to save yourself in the third wave? Narendra Modi secured 130 crore people by getting them vaccinated,” he said.

He highlighted various works done by the government in the Covid pandemic like giving free food grains to 80 crore, including 15 crore from UP.

“For the 15 crore people of UP, this is not only the lotus flower but also mother Lakshmi, Ma Annpurna, which came to their houses. Modi fed their children for two years,” he said.

Taking a jibe at Congress leader Rahul Gandhi, Shah said he even did not know about Kharif and Rabi crops but if someone would tell him to talk about potato growers in Aligarh he would say he will open a potato factory here.

“Can a person who does not know that a potato is grown in a field and not a factory resolve problems of farmers,” he said.

He said when there was “Sonia-Manmohan” at the Centre, anyone used to enter to India from Pakistan and cut off the heads of soldiers and the PM at that time would not react.

‘Mauni baba’ (Manmohan SIngh) used to remain silent. When Modi government came, Pak-sponsored terrorists did not know that government changed. When they attacked in Uri and Pulwama, within 10 days there was a surgical strike and terrorists were eliminated inside Pakistan,” he said.