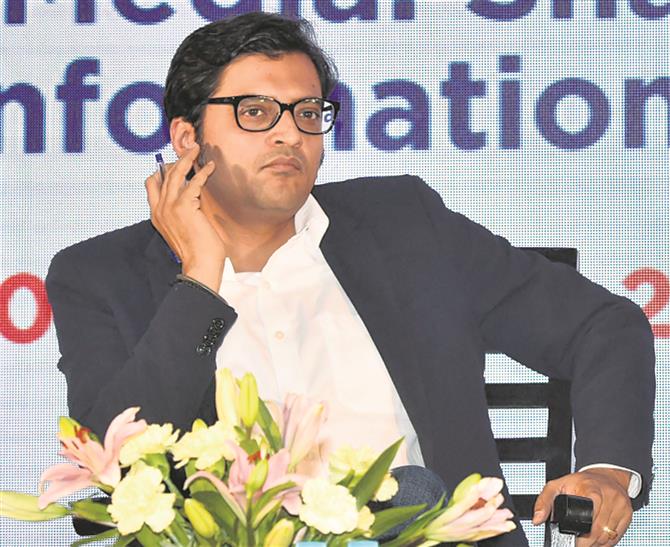 Screenshots of purported WhatsApp conversations between former Broadcast Audience Research Council (BARC) chief Partho Dasgupta and Republic TV editor Arnab Goswami show the latter claiming close links with the government, going to the extent of saying, “All ministers are with us”.

Arnab Goswami: Boss trust me the industry knows how badly we have demolished them

Partho Dasgupta: All kinds of political games have started

AG: All ministers with us

AG: Sir I have set platinum standard in breaking...this story is ours

PD: So again change of I&B minister; so who is next

AG: Smriti…so happy, she is a fighter and a great friend

AG: Sir 20 min ahead on the biggest terrorist attack... only channel with a ground presence…We have won like crazy

AG: Something big will happen

AG: No sir Pakistan... the government is confident of striking in a way that people will be elated

Explosive details of chats which the Mumbai Police are now relying upon in the TRP scam probe reveal how he had advance information on not just sensitive national security matters, but also of top constitutional, ministerial and administrative appointments.

The supplementary chargesheet containing the chats claim that Arnab allegedly passed on classified information to Dasgupta for the latter’s help in manipulating TRPs in favour of Republic TV.

A chat dated May 2017 shows Arnab boasting of close proximity to the government. In a July 2017 conversation, Arnab displays advance knowledge of Cabinet formation when he tells Dasgupta of the future developments at the Ministry of Information and Broadcasting.

“Venkaiah probable Vice-President,” Arnab says, with the then BARC boss asking who the next I&B Minister would be. Arnab discloses the name of Smriti Irani and says he’s happy at her elevation and that he was worried about “J” (Prakash Javadekar) coming in. The same day BJP parliamentary board picks Naidu as the party’s vice presidential candidate. Internal security matters were also reportedly known to Arnab in advance as is evident from an August 2019 chat where Dasgupta asks Arnab if Article 370 would be scrapped in J&K. Arnab answers in the affirmative.

Arnab’s links with the top BJP brass are also reflected in another chat where he says the “PM is being handled differently” after Dasgupta asks him about progress in handling the TRP scam.

The Congress, meanwhile, demanded a parliamentary probe saying: “The development impacted the national security.” Ex-Home Minister P Chidambaram asked: “Did a journalist (and his friend) know about the retaliatory strike in Balakot in advance? If yes, what is the guarantee that their ‘source’ did not share the information with spies working for Pakistan?”