All set for nail-biting contest to 16 Rajya Sabha seats in Haryana, 3 other states on Friday : The Tribune India

All set for nail-biting contest to 16 Rajya Sabha seats in Haryana, 3 other states on Friday 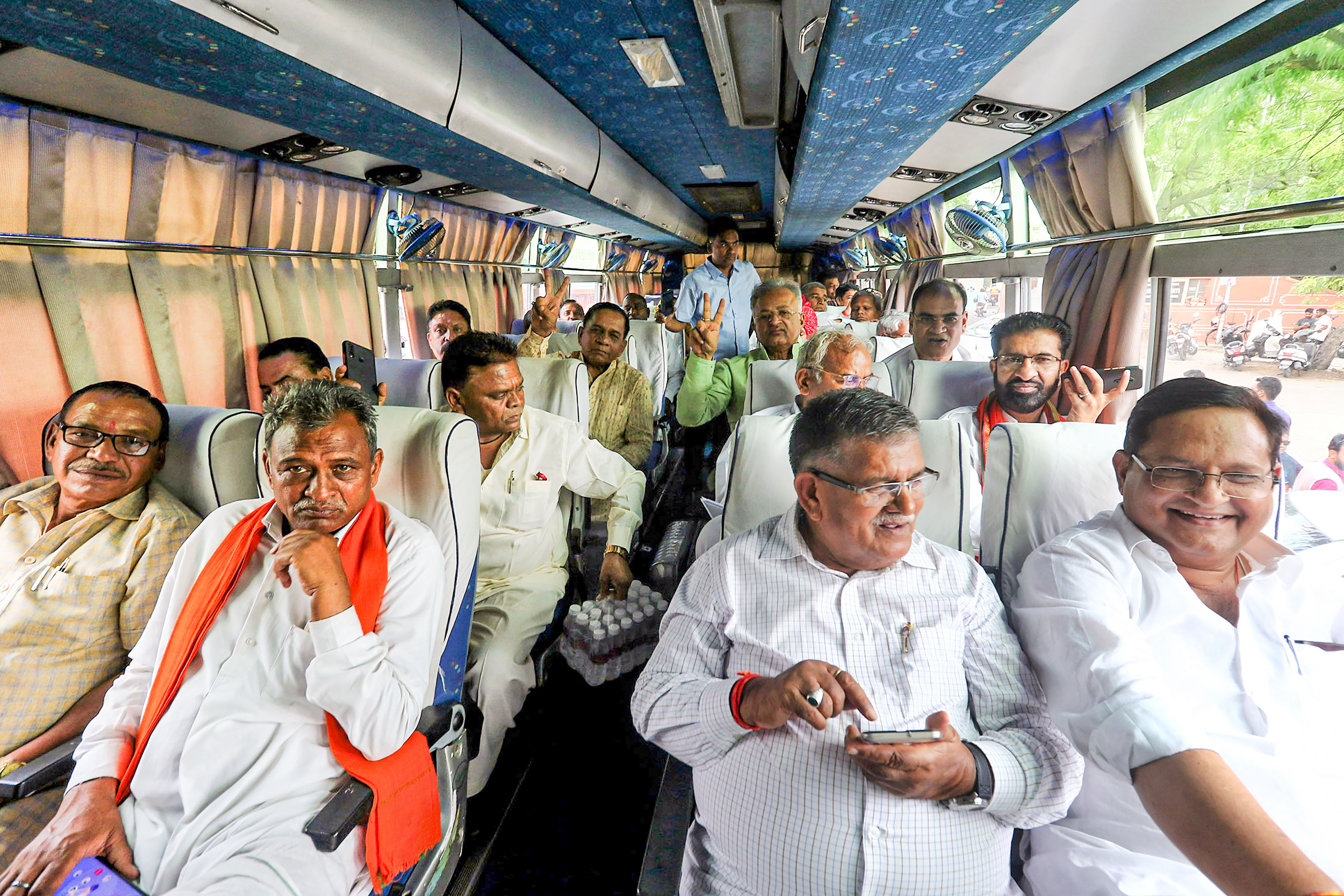 BJP MLAs board a bus and head to Jamdoli ahead of the Rajya Sabha Elections, in Jaipur. PTI

A nail-biting contest and finish to the biennial elections to 16 Rajya Sabha seats in four states—Haryana (2), Rajasthan (4), Maharashtra (6) and Karnataka (4) — is on cards after days of safeguarding voters in resorts, away from potential “poachers” and holding training camps to ensure “zero error while voting” with a pen provided by the Election Commission.

Overall, these set of elections were for 57 vacancies in the Upper House across 15 states. However, 41 candidates in 11 states — Andhra Pradesh, Chhattisgarh, Bihar, Jharkhand, Madhya Pradesh, Odisha, Tamil Nadu, Telangana, Uttar Pradesh, Uttarakhand and Punjab— have been elected unopposed.

In Maharashtra, where there is a fierce contest for six seats among seven candidates, the ruling coalition today received a major setback when a court rejected bail for two arrested leaders, Nawab Malik and Anil Deshmukh, whose votes were critical in elections tomorrow. Both are members of NCP, which, along with Congress, is a part of the Shiv Sena-led Maha Vikas Aghadi.

Incidentally, this is the first time in almost two decades that a contest will take place in the state.

The MVA has the numbers to win three seats, BJP can also win two on its own but it has fielded a third candidate Dhananjay Mahadik setting up a contest for the sixth seat with Sena’s Sanjay Pawar.

Every vote is crucial for the ruling coalition, which is trying to get Sena’s second candidate elected.

In Haryana, where the fight is on for two seats, the BJP state leadership is leaving nothing to chance. Exuding confidence for the victory of party candidate Krishan Lal Panwar, state chief Om Prakash Dhankar says 31 MLAs will vote for him and nine will support independent candidate and media baron Kartikeya Sharma.

Though Congress has 31 MLAs, one more than the required number, Kuldeep Bishnoi’s recent actions and utterances have given it reasons to worry. The 10 MLAs of BJP’s ally JJP are also expected to support Sharma. While Congress has one more than the number required to ensure a win for its candidate Ajay Maken, factionalism and last-minute entry of Sharma have the potential to spoil his chances.

It is almost similar in Rajasthan where chief minister Ashok Gehlot has parked his MLAs in a Udaipur hotel, which also hosted the party’s Chintan Shivir last month In Rajasthan. The state has four seats for which Congress has announced three candidates, and BJP one. However the BJP is also backing independent Subhash Chandra, again spelling trouble for Congress’s Pramod Tiwari.

In Karnataka, ruling BJP is set to win two of the four seats and Congress one. The fourth seat, however, is the critical one for which the two parties have fielded an extra candidate. Congress has fielded former minister Jairam Ramesh and Mansoor Ali Khan, BJP Finance Minister Nirmala Sitharaman, actor Jaggesh and Karnataka MLC Lahar Singh Siroya. Real estate baron D Kupendra Reddy is the JD(S) candidate.

Votes required by each candidate to win: 41

Votes required by each candidate to win: 31

Votes required by each candidate to win: 42

Votes required by each candidate to win: 45