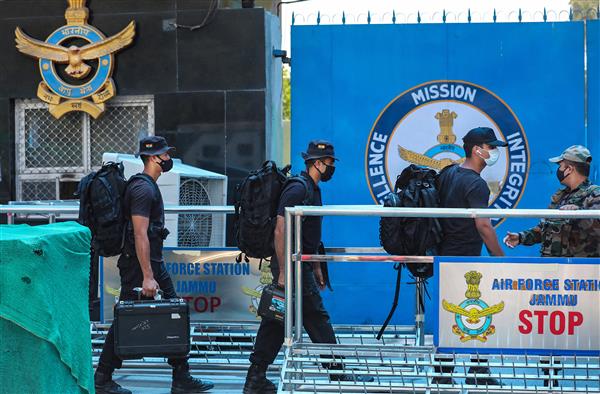 Military installations have been placed on high alert following two low-intensity explosions inside the Jammu Air Force Station on Sunday morning that are suspected to have been caused by low flying drones.

“The possibility of such incidents at other places cannot be ruled out. Surveillance in and around military bases has been stepped up and additional resources have been deployed,” an officer said.

Since the deployment of anti-drone systems is still in a nascent stage, more guards have been deployed around the periphery to keep an eye out for suspicious flying objects, he added.

The highly sensitive Air Force Station in Jammu is located just 14 km from the international border with Pakistan and is an important installation as it houses helicopter, UAV and ancillary units. It also has a co-located civil enclave maintained by the Airports Authority of India for commercial operations.

The Border Security Force (BSF), responsible for the peacetime management of the Indo-Pakistan border, is also on the alert. The BSF has been reporting increased drone activity along the border over the years.

In the past five months alone, there have been a number of instances where illegal arms and ammunition are believed to have been dropped on the Indian side of the border. This is in addition to incidents of drones being used by Pakistan for reconnaissance violating Indian airspace in the Jammu region.

On May 16, BSF personnel had observed a drone hovering along the international border in Kanachak Sector at night, which prompted a massive search operation to be launched in the area.

Only a couple of days before this, BSF had recovered some arms and ammunition from the Samba sector, which it said had been dropped by a drone on May 14.

On April 24, BSF personnel had fired upon two drones that had crossed into the Indian side of the border in Arnia sector of Jammu. On February 14, six pistols and some improvised explosive devices were recovered by the BSF in Samba.

The preceding years also witnessed several incidents of arms and ammunition from Pakistan being dropped across the border along the Samba-Jammu-Akhnoor axis. The international border with Pakistan ends at Akhnoor and the Line of Control that separates Jammu and Kashmir from Pakistan-Occupied Kashmir runs further north.

While the central government has come up with a policy to regulate the ownership and operations of drones in India, the use of rogue drones by terrorists or hostile nations have been cited as a serious security risk.

Most types of drones being used are much smaller than conventional aircraft and since their minuscule radar cross-section and low altitude makes them difficult to track electronically, ground forces have to rely primarily on visual sightings and audio signature to detect them.

The armed forces as well as police organisations are developing anti-drone capability  that includes a doctrinal approach to counter the threat as well as the technology and physical systems to detect and neutralize drones. There are several means by which a drone can be detected, identified, disabled or destroyed.

Last year, the Defence Research and Development Organisation had unveiled an anti-drone system designed by it, which is reported to have been deployed selectively so far, with state-owned Bharat Electronics Limited designated as the production agency.

The UN Conference on Trade and Development Investment Trends...