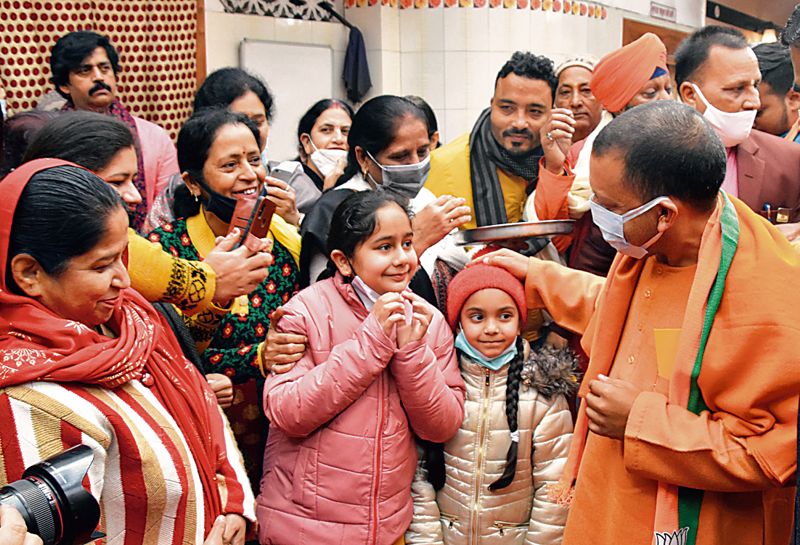 All eyes are on the BJP’s election manifesto for Uttar Pradesh with the party expected to make major announcements on “free electricity” to counter rival Samajwadi Party’s promise of free 300 units. Union Home Minister Amit Shah will release the BJP manifesto for UP in Lucknow tomorrow.

Meanwhile, according to UP CM Yogi Adityanath, the BJP’s “Lok Kalyan Sankalp Patra on February 6 will be on the issue of nationalism, development and good governance”.

Transport Minister Nitin Gadkari is also expected to launch the BJP’s manifesto for Goa in Panaji on Sunday, when Prime Minister Narendra Modi addresses a virtual rally for the state. Amid the expected exchange of charges between rivals, Defence Minister Rajnath Singh today hit out at the Samajwadi Party, accusing it of doing “politics of appeasement”.

Addressing an event in Mathura, he also mocked Congress leader Rahul Gandhi for relying on Chinese media rather than trusting the valour of Indian soldiers. “Rahul talked about the China-India clash in the Galwan valley, believed anything he read and said only three Chinese jawans were killed. I would like to clarify, as per an Australia-based newspaper, 38-50 Chinese jawans were killed, not 2-4. Indian borders are safe,” Singh was quoted as saying.

Meanwhile, the SP chief, who was in Aligarh today, said, “Farmers had to stage protests for a year in order for the Centre to take back the three farm laws. As elections approached the states of Punjab and Uttar Pradesh, the BJP repealed the black laws.”

PM to address hybrid rally in UP tomorrow

New Delhi: Prime Minister Narendra Modi will on Monday undertake his first visit to Uttar Pradesh since the announcement of the elections and will address a hybrid rally in Bijnor. The PM will address Bijnor, Moradabad and Amroha segments that hold 18 Assembly segments. The PM’s visit comes after the EC recently relaxed rules to hold rallies. So far all of PM’s rallies in poll-bound UP have been digital. In the Bijnor hybrid rally, the PM will be present in Bijnor and people of various constituencies will connect virtually. TNS