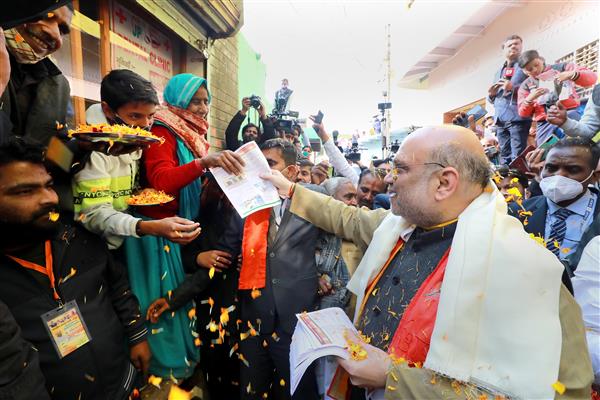 With just about a fortnight to go before Phase-I of Uttar Pradesh polls, the war for politically significant vote bloc ‘jats’ and ‘gujjars’— who participated in the year-long agitation against the now-repealed farm laws, is intensifying in the Western UP.

Home Minister Amit Shah, who was in the region today for yet another outreach, had yesterday held a meeting with leaders of the Jat community at the residence of Delhi MP Pravesh Singh. Interestingly, apart from slamming main rival Samajwadi Party chief Akhilesh Yadav for “corruption, law and order”, etc., Shah also termed him an “outsider” while going all out to woo his ally, RLD chief Jayant Chaudhary.

Breathing fire against the SP and Mayawati-led BSP, his “soft” approach towards Jayant was unmissable, even today in Mathura, leading to widespread speculations about “possibilities” which yesterday BJP MP Parvesh Verma had also hinted at.

Significantly, Shah yesterday urged Jat leaders assembled at the residence of Verma “why do you bring outsiders in a fight within the house”. He also said “Jayant has chosen the wrong house this time” while pointing that “ideology of both the BJP and Jats is the same as both keep national interest first and have been fight against invaders”.

Though Chaudhary has rejected the offer, terming it an “election tactic”, Shah’s move set the cat among the pigeons with rivals sensing red, calling it an “underhand attempt to confuse the voters”.

The subtle messaging has set the buzz on the future possibilities, including post-poll alliances, while highlighting the BJP’s apprehensions on the around 158 seats of Western UP in the 403-member Assembly.

On his part, Jayant today again rejected the offer saying that the BJP needs to fulfil “promises to farmers and also stop the politics of polarisation”.

Akhilesh and Jayant will also hold a joint press conference tomorrow, Friday, in Muzaffarnagar, where they are expected to take on the BJP on its latest strategy.

Responding to Verma’s invite that “BJP’s doors are always open” to him, Jayant yesterday had taken to the social media to slam it and to “instead send invitations to the 700 farmers’ families who lost their dear ones during the protests”.

“People of the Jat community will speak to Jayant. BJP’s doors are always open for him. We also suggested that people of the Jat community to talk to Jayant,” Verma had said after the meeting. Expressing gratitude to Jats for always supporting the BJP, Shah also claimed that no one, except Prime Minister Narendra Modi, gave respect to farmer leader Mahendra Singh Tikait, the father of BKU leader Rakesh Tikait. Again, today while he slamming the BSP and the SP, he did not say a word against Jayant.

Notably the BJP has been raising issues related to law and order and Muzaffarnagar riots during the Akhilesh rule, the grand Ram Temple during the BJP regime and Jat reservation in Western UP, to woo the crucial vote block. Addressing the ‘Effective Voter Communication’ program in Mathura, Shah said “the BJP drew a map for complete development of Uttar Pradesh. Only after Prime Minister Modi took charge and Yogi Adityanath became the Chief Minister, the mantra of ‘Sabka Saath, Sabka Vikas’ was implemented.

“BJP is not the party for one caste but for the entire society,” Shah said, thanking the people of the Braj for always choosing lotus (BJP)”. “UP elections will decide India’s destiny,” he said.

Jats are an important factor in almost all the seats in the region where the RLD enjoys influence. Opposition SP and RLD have been trying to revive ‘MAJGAR’, the caste combination of Muslim, Ahir (Yadav), Jat, Gujjar and Rajput which suffered a major dent following the 2013-Muzaffarnagar violence.