The technique was pioneered by Japanese botanist, Akira Miyawaki 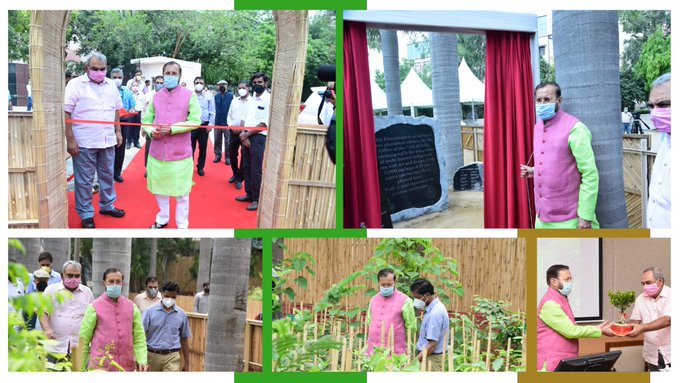 Environment Minister Prakash Javadekar inaugurated an urban forest with 12,000 seedlings on Thursday which would serve as a role model for offices in Delhi.

Planting 59 indigenous species besides the CAG office, near the ITO, the project was initiated in October 2019.

A full-fledged forest will be there in another two-and-a-half-years or so, said officials.

"This could help in reducing the temperature by almost 14 degrees, and could increase the moisture by more than 40 per cent", said the Minister.

"Urban forests are the lungs of cities, acting as oxygen bank and carbon sink", said the Minister.

The Miyawaki method of forest creation has been used to create the urban forest in the heart of the National Capital.

The technique was pioneered by Japanese botanist, Akira Miyawaki, and is believed to ensure 10 times faster plant growth, which results in plantation, that is 30 times denser than usual.

According to experts, this process involves planting dozens of native species in the same area, which becomes maintenance-free after the first three years.

Today inaugurated a unique Urban Forest at the Office of the CAG of India. Urban forests are the lungs of cities, acting as an oxygen bank and carbon sink.@moefcc pic.twitter.com/49zuhdA2OR

Over the years, the Air Quality Index (AQI) of Delhi has become an increasing cause of concern.

Further, the ITO crossing of New Delhi has recorded particularly high air pollution levels. In response to these developments and keeping in view its community responsibilities, the office of the Comptroller and Auditor General of India which is located at Bahadur Shah Zafar Marg has taken steps to establish the Urban Forest in the Office Park. Keeping in view the limited area, local material was adopted to enable intensive afforestation, according to officials.

The forest is made up of trees which are native to the area and are three-dimensional, multi-layered communities having 30 times the surface area of the greenery of single-layered lawns, and have more than 30 times the ability to protect against natural disasters and to conserve the environment.

With minimal maintenance, including watering and de-weeding, the urban forest will be self-sustainable by October 2021.

The Urban forest has an ecosystem which can restore habitat for birds, bees, butterflies and microfauna. These are essential for pollination of crops and fruits and to help maintain a balanced ecosystem. A dense forest ecosystem has been created in an area that is little over 1 acre in size.

The species selected are part of Delhi’s potential natural vegetation and are best suited to the region’s terrain, climate and soil. The urban forest sends out an action-oriented message of bringing back lost environmental protection forests.

In-depth field surveys of potential natural vegetation, well planned native species’ propagation and restoration projects like these are the need of the hour. The office of the CAG of India believes that initiatives like these will help us move towards a state of better ecological balance, especially in cities.

It is a small yet significant contribution to Delhi’s ecosystem, one that could inspire people to reclaim and restore their natural surroundings.

Recently, on the occasion of World Environment Day, the government announced the implementation of the Nagar van scheme to develop 200 Urban Forests across the country in next five years with a renewed focus on people’s participation and collaboration between Forest Department, Municipal bodies, NGOs, Corporates and local citizens.